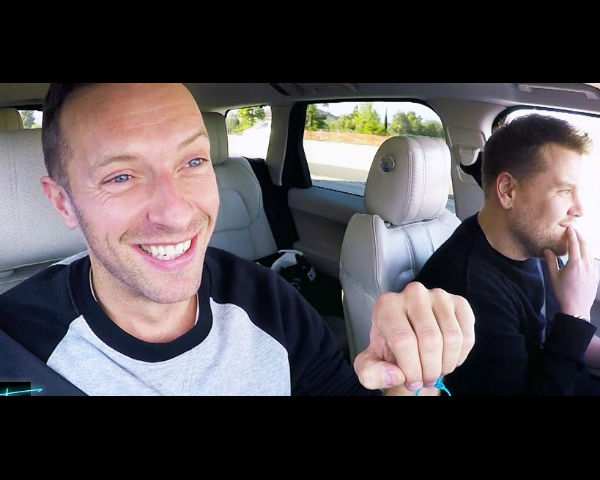 Out for a drive, James Corden spots Chris Martin looking for a ride to San Francisco to perform with Coldplay in the Super Bowl 50 halftime show.

For amusement along the way, the two immediately sing Coldplay's "Adventure of a Lifetime" and "Yellow" as well as discuss the rules of "American football."

Martin also took time out to acknowledge Adele’s iconic status. “Adele is a cool name, just the one word,” Martin said. “I think if you say ‘the cold,’ no one’s thinking Coldplay yet. So we’ve got to work harder.”

At one point, Corden is enthusiastically singing along to "Viva la Vida" when Martin suddenly notices he's singing the wrong words.

"You sing what you like," Martin smiles. "That's music!"

Martin didn’t limit himself to singing just Coldplay songs. At one point, he pulled out a portable keyboard for a rendition of the late David Bowie’s “Heroes.” He also busted out an impeccable Mick Jagger impression.