Was Gabby Douglas feeling salty about her fellow U.S. gymnast after watching her slaughter the competition during last night's All-Around event at the Olympic Games in RIo?

Following Simone Biles' floor routine on Thursdsay, the camera flashed to Biles' teammates, who were on their feet cheering her on to victory. However, when it came to Douglas, she didn't crack a smile -- and she also didn't stand up.

"Do we need an unsportsmanlike conduct call towards Gabby Douglas? The Olympic gymnast seemed like she could totally care less when her teammate Simone Biles won the women’s all-around event, looking so salty and refusing to stand and cheer on her victory," Hollywood Life reported on Friday.

While Douglas hasn't yet spoken out about her seemingly salty stare down during last night's event, this isn't the first controversy she's faced -- and it may not be the last.

"This has been a rough Olympics for Gabby image-wise, and her sullen behavior about her teammate’s victory just adds to it," the outlet continued. "On Aug. 9 when she was part of the women’s team all-round that won the gold, she was the only member of the squad to not put her hand over her heart as the National Anthem played, causing her to get pummeled for being unpatriotic and disrespectful. Now she’s showing absolutely no sportsmanship for her teammate’s big victory, which comes across as such a diss!"

To see the awkward Olympic moment for yourself, check out the Hollywood Life clip below. 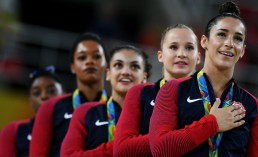 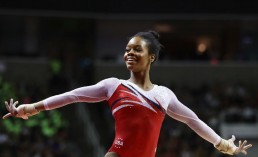 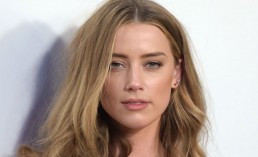