The man who made headlines long before we knew his name after he was spotted kissing Rihanna and he has officially been identified.

It turns out the former mystery man is Hassan Jameel, a Saudi businessman from one of the wealthiest families in the world, The Sun revealed on Tuesday.

His family owns the rights to sell Toyotas in Saudi Arabia. Jameel is already involved in the family business as he's the deputy president and vice chairman of Abdul Latin Jameel, which has been recognized as one of the largest business in the world.

"This relationship is the real deal," one insider said. "Rihanna has told friends she's in love with him and seems completely smitten. They've been spending a lot of time together away from prying eyes and are really serious. They're really enjoying each others' company."

Interestingly enough, Rihanna is not the first celebrity Jameel has been linked to.

He was spotted getting nearly just as handsy with supermodel Naomi Campbell last year.

The two ladies were reportedly feuding earlier this year after they unfollowed each other on Instagram.

Campbell spoke on the alleged beef with Andy Cohen on Bravo's Watch What Happens Live in March.

"Everything's fine," she said after Cohen asked about the reported issues on behalf of a fan. "I'm an actress now Andy. I don't have beef, especially with black women that I think are powerful. We're out here doing the same thing, and doing the same struggle."

Rihanna has yet to speak on the alleged beef or her latest rumored beau.

But before she and Campbell unfollowed each other, they actually supported each other numerous times at various events and promotions.

Check out photos of Campbell and Rihanna with Jameel here. 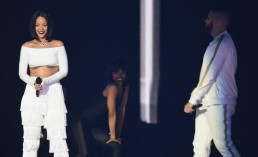