The Walking Dead's Season 8 premiere episode, titled "Mercy," perfectly sets the tone for what promises to be an action-packed, fast-paced eighth season, which is exactly what the AMC zombie drama needed after a slump in ratings last season.

Last season ended on a positive note, with the inhabitants of Alexandria, Hilltop and the Kingdom coming together to take down The Saviors and their baseball-bat-wielding leader Negan (Jeffrey Dean Morgan).

The Season 8 premiere definitely lives up to this season's tagline of "All Out War" as the episode, which includes several time-shifts, kicks off with Rick (Andrew Lincoln), Ezekiel (Khary Payton) and Maggie (Lauren Cohan) rallying the troops for an attack on the Sanctuary.

A group of walkers is led toward the Sanctuary with the help of explosions set up by Daryl (Norman Reedus) and before the flesh-eating zombies arrive, Rick shows up at the front door with some heavily armored vehicles and a ton of guns and ammo, all thanks to Dwight (Austin Amelio), who was kind enough to point out the locations of each Savior lookout.

There are a few noteworthy moments that take place before the epic Rick and Negan showdown; Carl (Chandler Riggs) bumps into a new character at a gas station during a supply run with Rick. The guy presented himself as a helpless and hungry man who is looking for help, jabbering about having a microwave thrown at him before Rick scares him away, but Carl returns to the scene to offer the poor man some food.

The Walking Dead's newest survivor, played by actor Avi Nash, appears to be the Arab-American character from the comics, Siddiq, as he references a quote from an Islamic religious text. Moreover, Siddiq was also known for being a character who traveled alone, as it appears to be the case with this new character as well.

Going back to Rick and Negan, the former declares that Negan is the only one who deserves to die, and the rest can walk away alive if they surrender. Rick then starts a countdown but gives up at the count of seven and opens fire, but Negan manages to escape, although with an injury. Rick continues to fire at his arch nemesis like a maniac until Gabriel (Seth Gilliam) has to remind him that this wasn't about him and drag him away.

Probably, the reason behind all the shooting was to simply keep the Saviors at bay until the herd of walkers arrived. Gabriel then risks his life to save Gregory (Xander Berkeley), who is now on Negan's side, but finds himself stranded as the undead overrun the Sanctuary. The priest manages to find cover but realizes he's trapped with a giddy Negan.

The episode's biggest moment was the scene at the end where we see an old Rick talking to Michonne (Danai Gurira) and a grown-up Judith about a festival and a "big owl" outside as Weird Al's "Another One Rides The Bus" plays in the background. This appears to be a vision from the future, but what is real is a teary-eyed Rick muttering the words, "My mercy prevailed over my wrath."

The Season 8 premiere marked the 100th episode for the popular AMC drama and had its fair share of Easter eggs — be it the scene where Carl is looking for gas, which is a nod back to the first scene ever with Rick and the zombie girl, or the return of the orange backpack. Even the old Rick scene from the future had flowers next to his bed as a throwback to the very first episode.

"We wanted to open the season very much like the way the show premiered way back eight years ago," director Greg Nicotero told EW. "So all those things were put in there as a little thank you." 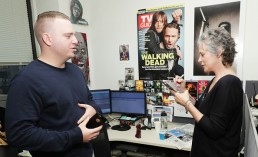 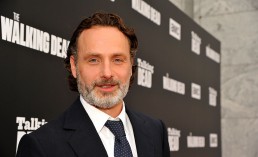 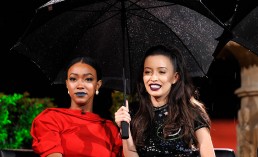