Kendall Jenner and Blake Griffin stepped out for not one, but two dinner dates in Los Angeles this week.

Following an injury on the basketball court, Griffin was forced to slow down on the career front. Luckily for Jenner, however, the incident has seemingly paved the way for her and Griffin to spend even more time together.

On Friday, Dec. 8, the Daily Mail shared photos of Jenner and her rumored boyfriend, who she's been linked to since August, revealing that the pressumed couple sported coordinating outfits while out in Los Angeles on Thursday, Dec 7. The outlet also revealed that Jenner and Griffin visited The Avalon in their matching black and gray ensembles.

In the photos, 22-year-old Jenner wore a pair of gray pants with leather boots as she wore her rumored boyfriend's jacket over her dark gray turtleneck. As for her hair, the model kept it simple with a pony tail.

“They’re legit. They’re a full-on couple,” an insider told Us Weekly in October. “Kendall has been going to a lot of his games and they have been enjoying time at home when Blake is in town. They’re good.”

“They are having a good time together,” a source previously told the magazine.

According to the report, Jenner and Griffin embarked on a trip to The Queen Mary’s Dark Harbor in Long Beach, California in October and during their visit, they reportedly stayed quite close to each other as they enjoyed a number of Halloween festivities.

“Kendall and Blake were very close the entire night, holding on to each other through the fun frights in the mazes and sitting next to each other in the Creepy Cabana while enjoying treats and watching the live performances,” an eyewitness told Us Weekly at the time.

Jenner's rumored romance with Griffin came just weeks after she was last linked to rapper ASAP Rocky. As fans may recall, Jenner and the musician were first tied to each other in February 2016, but continued to spend time together for several months without confirming the nature of their relationship.

To see more of Jenner and her family, including sisters Kim, Khloe, and Kourtney Kardashian, and Kylie Jenner, tune into new episodes of Keeping Up With the Kardashians season 14 on Sundays at 9 p.m. on the E! Network. 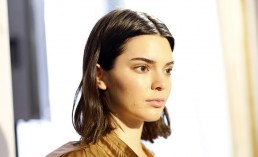