Sarah Jessica Parker may have gotten Sex and the City fans excited again. The Divorce actress touched on whether there would be a chance at the third film making its way to theaters, and Parker had a surprising suggestion at who should play the character "Samantha".

During an interview with talk show host Ellen DeGeneres, the actress was asked if a third film would still be in the works and if she and her two costars, Cynthia Nixon and Kristin Davis, signed on to the reprise their roles. While Parker would want that to happen, she didn't seem too optimistic about it. Parker did, however, try to lighten the mood by jokingly suggesting that DeGeneres should take on the role of the raunchy Samantha Jones.

"There's a period of grief, a mourning process and then perhaps we'll be able to consider, say for instance, you playing Samantha," Parker stated.

"[She's] so me. That's who I identify with on that show. I am a sexual beast. I talk about it a lot. I do it a lot. This is a façade. When you meet me as a real person out in the world, this is my talk show persona," DeGeneres stated jokingly.

After rumors and reports of a third film being in the works, Parker shut down everyone's dreams by stating it wasn't happening. After Parker's announcements, reports began to circulate that the main cause for the film's termination were the "high demands" from actress Kim Cattrall. Cattrall who portrayed Samantha for 20 years denied these reports, claiming she was "no diva" and had nothing to do with the film being canceled.

While the other leading ladies continue to hold out hope for a SATC reunion, Cattrall has made it clear she wants no parts of it. The actress even elaborated that she and her former costars weren't even close in real life.

"They all have children and I am ten years older, and since, specifically, the series ended, I have been spending most of my time outside New York so I don't see them. The common ground that we had was the series and the series is over," Cattrall stated.

Since then Cattrall has not made any further comments regarding the film.

Watch the clip from The Ellen DeGeneres Show below! 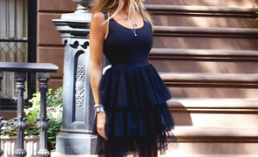 Sarah Jessica Parker Confirms Cancellation Of ‘Sex and the City 3’