Outspoken actress Rose McGowan broke her silence to ABC's The View in her first television interview since Hollywood's sexual misconduct scandal was unearthed.

McGowan was met by a standing ovation by The View's audience before host Whoopi Goldberg asked her to reveal how disgraced movie mogul Harvey Weinstein raped her at the 1997 Sundance Film Festival. McGowan recalled the moment when her life got hijacked and stated that her consciousness left her body when Weinstein attacked her.

Guest host Ana Navarro asked McGowan if anyone helped her after the incident. McGowan stated that no one helped her. She also called Weinstein a "warthog from hell."

Co-host Joy Behar asked if Weinstein ever contacted her and McGowan revealed the horrifying response.

Co-host Sunny Hostin revealed that McGowan was also the woman who exposed Weinstein in both The New York Times and The New Yorker. While McGowan acknowledged Hostin's comment, she stated that she did not understand why anything legal is not happening with him. She also revealed that Weinstein had profound influence in the Democratic Party, Hollywood, and all around the world.

One of the most emotional moments of the sit-down interview happened when McGowan revealed that the Weinstein-endorsed media outlets attacked her character for 20 years. The actress broke down when she stated that her sister denied being related to her.

Other memorable moments from the interview included McGowan calling out Justin Timberlake for working with Woody Allen.

McGowan Versus Time's Up Movement

McGowan has had a big problem with the Time's Up movement. When some of Hollywood's biggest names such as Oprah Winfrey, Reese Witherspoon, Shonda Rimes, and Natalie Portman decided to form the Time's Up movement, McGowan was disgusted that the group decided to join forces with one of Hollywood's significant power brokers: The Creative Artists Agency.

The Charmed actress stated that because of CAA's "seedy past" and the "Hollywood fakery" surrounding the 75th Golden Globe Awards where attendees were encouraged to wear black to stand in solidarity with all of the sexual assault and misconduct victims, she decided not to show up at the ceremony. McGowan's decision to confront the group on social media came days after the actress signed her name on the initial Time's Up Letter.

While the actress has shone the spotlight on the sexual assault perpetrators, McGowan has been known to go after people who knew about the sexual predators' activities and did not do anything about it. McGowan's biggest target was acting legend Meryl Streep. The Once Upon a Time actress accused Streep of staying silent and continuing to work with Weinstein.

Streep stated that she did not know about Weinstein's immoral activities and found the former Weinstein Company leader's behavior 'inexcusable.'

McGowan has spent a substantial majority of her time campaigning against Weinstein in the courtroom, even to the the point that she had to sell her home to keep up the legal battle against her "evil monster's" unspecific legal action against her.

In her memoir, Brave, McGowan graphically described how Weinstein allegedly sexually assaulted her. McGowan stated that Weinstein lured her in 1997 to his hotel room at Park City, Utah and physically removed her clothing. That same year, Weinstein gave $100,000 to McGowan in exchange for silence.

Weinstein has denied not only McGowan's claims but also 83 other women who accused him of sexual assault.

On The View, McGowan spoke about the Times' Up Movement. Watch below to hear her reactions. 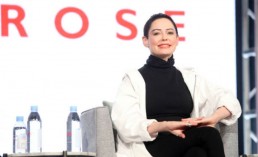 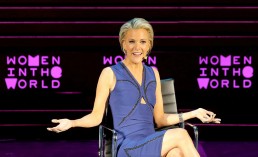 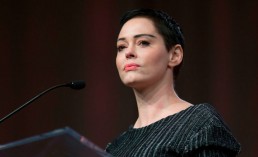