Sean Lowe and wife, Catherine Giudici, are not the only ones excited to see their new bundle of joy. Their eldest child, son Samuel, also cannot wait to be a big brother.

Lowe took to his Instagram on Tuesday to share a photo of his son bonding with his mother. The adorable snap shows Samuel with his face on Giudici's pregnant belly.

It is unclear what is going on when he took the photo, although it may seem like Samuel is kissing his mother's belly. However, The Bachelor alum teased that Samuel "is threatening the baby."

The photo has since received over 56,000 likes and 145 comments as of this writing. Fans played around with Lowes thinking and added Samuel only wants his mother for himself. "U better stay in there!!! She's mine all mine!!" one fan wrote. "'If you think, for one second, that I am sharing my parents, you are sadly mistaken,'" another user wrote, while another added, "He's letting him/her know who's the boss around here." Meanwhile, others thought that perhaps Samuel is just excited to be able to play with his baby sibling. The photo does make it look like the 20-month-old child is talking to the baby.

The couple announced that they were expecting a second child on social media in November. They also got a little help from Samuel with the baby reveal. The 34-year-old Lowe shared a video of Giudici lounging on the couch with their son. In the clip, Lowe can be heard asking Samuel to say "baby," to which he adorably replied, "Bubbah" before pointing at his mother's already growing belly. "It's happening," Lowe captioned the video, which received nearly 1 million views.

Lowe and Giudici have yet to reveal the gender of their second child, although the couple might be welcoming another son. The author of Love, Marriage, and Why Nice Guys Finish First said he has a hunch that it will be a younger brother for Samuel. However, Lowe admitted that he and Giudici will still be happy regardless of the gender.

"We'll be so happy either way. Catherine wants five kids. And we want to adopt as well. It's all a learning process!" Lowe said, adding that they are not going to find out the gender until the baby's birth in the hospital. 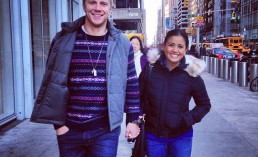 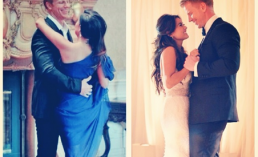 Sean Lowe And Catherine Giudici Wedding: Former 'The Bachelor' & Wife Dish On Being 'In Heaven Right Now' & Having Sex [VIDEO]