Should Blake Shelton be worried about Kelly Clarkson getting close with Gwen Stefani? The six-time winning coach might be jealous of Clarkson's friendship with Stefani.

The "God Gave Me You" singer noticed that Clarkson has been unleashing her inner fangirl when it comes to hanging around Stefani. Shelton noted that Clarkson is the wife of one of Shelton's oldest friends and business partners, Brandon Blackstock. Blackstock also serves as Shelton's manager, and he added that every time the two couples get together, he sees a different side to Clarkson.

"It's fun to be around Kelly because there's that part of Kelly that I love about her -- she's still such a fan of artists. One of my favorite times is to see her around Gwen...it's fun for me to see that fan, freak-out side of Kelly. She makes everything fun," said Shelton to E! News.

Cheering From The Sidelines

Stefani has gone on record to showcase her support for Shelton, Clarkson, and their fellow coaches Maroon 5 frontman Adam Levine and Alicia Keys. The "Hollaback Girl" singer and fashion designer want The Voice to pull off a significant victory in the ratings war between The Voice and its longtime rival American Idol. When the show was shooting several episodes, insiders spotted Stefani on the set giving her boyfriend advice and tips off camera in hopes that The Voice would crush the Katy Perry, Luke Bryan, and Lionel Richie-backed American Idol.

While Stefani has picked a side on the singing competition war, both Clarkson and Shelton are very cautious when it comes to asking Blackstock to pick a team as the two singers clash as coaches on the latest season of The Voice. According to People Magazine, Shelton called the "Medicine" singer his 'enemy' when they are on the NBC singing competition's Universal Studios Hollywood set, but will not bring Blackstock into their on-camera bickering matches.

"He's like Switzerland. I always do say though that at least I put out -- so unless he's doing something I don't know about, I should win," said Clarkson to People Magazine.

The Blake And Gwen Story

Shelton and Stefani began dating in November 2015. Her three children, 11-year-old Kingston, 9-year-old Zuma, and 4-year-old Apollo see Shelton as a father figure. Also, multiple insiders have reported that the duo has a happy and healthy romance with one another. However, fans will have to wait a bit longer to see if the two singers are going to walk down the aisle.

Despite the long countdown, Stefani has always let her social media followers get glimpses of her romance with Shelton. She reposted a group photo on Instagram that was taken inside the Greensboro Coliseum Complex at Greensboro, North Carolina. 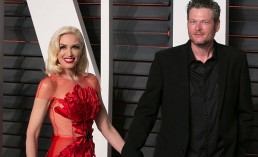 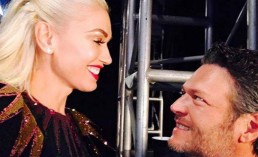 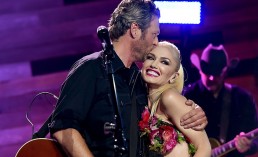