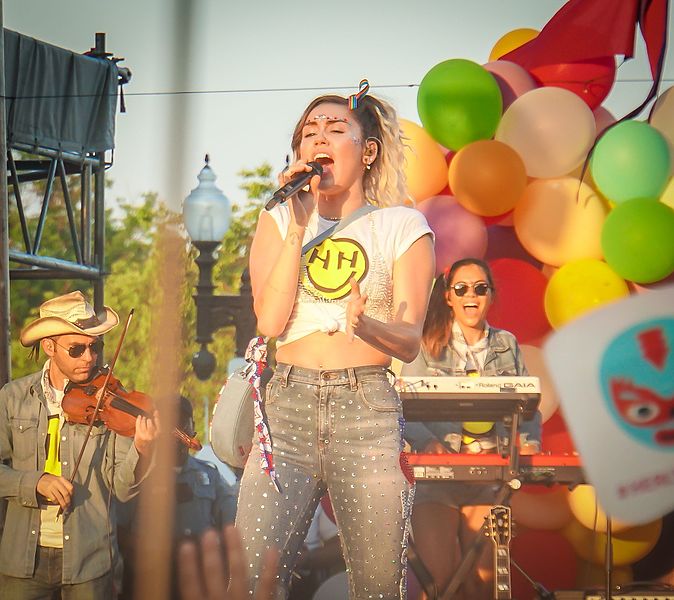 Fans are all up for a potential new romance for Kaitlynn Carter after her short-lived fling with Miley Cyrus.

Following her split with Brody Jenner after a year of marriage, Jenner took a break and went to Italy with long-time friend Miley Cyrus, where the pair was photographed kissing. In September, though, it was revealed that the pair has parted ways. It was said that Cyrus was not yet ready for a serious relationship after her separation with estranged husband Liam Hemsworth.

Just this October, however, Cyrus has moved on to dating Cody Simpson. There were even photos of them together at her brother's wedding.

Carter sported a black blazer over a black cropped one-sleeve top and paired it with high-waist jeans and strappy sandals. She had her hair styled in a messy bun and seemed glamorously prepared for her Friday night-out. Zauzig, on the other hand, dressed warmly with his fur jacket over his black ensemble.

While fans were all up for a new romance for the blogger, others were confirming that Zauzig, in fact, is gay. It somehow put the case to rest, much to a few followers' dismay.

In an essay for Elle, Carter has recently opened up about her past relationships and confessed the immense heartbreak she just went through.

Carter explained that while her relationship with Jenner was very real, the two have inevitably grown apart, which led them to ultimately ending their marriage.

"The legitimacy of [our] marriage has become a matter of public debate, but for he and I, it was very real. He was quite possibly the most beautiful man on the planet, with a heart of gold and a tireless sense of adventure... Eventually, though, after years of 'excitement,' we found we'd done as much growing apart as we'd done growing up," Carter wrote.

At the time before the split, Carter began spending lots of time traveling alone or with her friends, "quietly mourning" of what she knew would be the end of their marriage.

After her divorce with Jenner, she and 26-year-old Cyrus decided to travel together in an attempt to move on from the demise of their respective relationships. That was when the relationship between the two of them was born.

"Until that trip, it had never crossed my mind that I was even capable of loving a woman the way I loved her," Carter shared. She called it a "familiar force of nature" that simply happened and "felt exactly right." She further reflected on their three-year friendship and realized that she had "always been drawn to her" in a different way than that with her other friends. Their trip to Italy, however, was the straw that made her see Cyrus in a romantic sense.

Despite their relationship being short-lived, Carter was still grateful for the time they had together. According to her, it has opened her eyes and allowed her to discover an "unexplored part" of herself.

"This was a profound journey of self-discovery," she said. "For the first time, I listened to myself, forgot about the 'norm,' and lived."

READ MORE: Kaitlynn Carter Heartbroken Over Miley Cyrus: 'I Was in Love with Her'