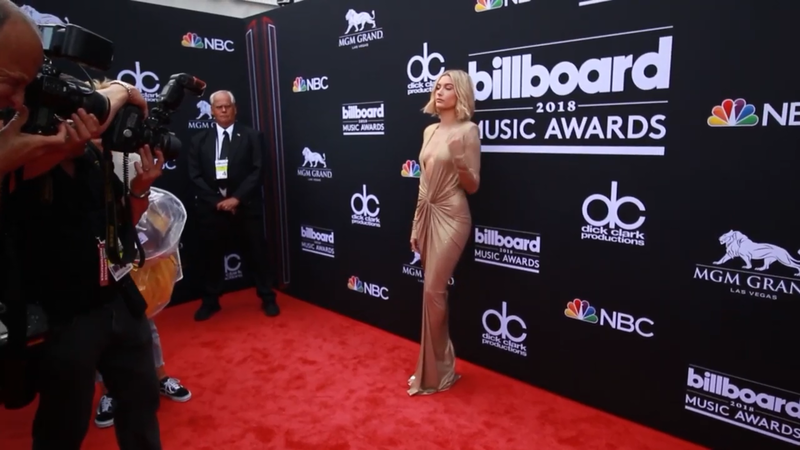 The late Princess Diana was not just a beautiful face. She was an image of what royal perfection is about.

Her beautiful heart has left a pretty good legacy for her sons to take after, but her inimitable charm is a whole different story. Her understated royal style is what keeps Kate Middleton and Meghan Markle on their toes since they married into the royal family.

Fashion fans would always remember that at some point in her life, Princess Diana had a flair for athleisure, too. Who could ever forget about those iconic photos of her walking around town in an oversized "Fly Atlantic" sweater, bike shorts in peach, and a pair of chunky runners?

Hailey Baldwin-Bieber certainly is one to remember. The trendsetting model just walked out of her house wearing the exact same style with a modern twist.

On Tuesday, Hailey was seen on her way to the gym sporting a Princess Diana signature "off-duty" style -- a baggy sweatshirt worn over skin-tight leggings. What completed the look was a huge pair of funky sneakers, which looked a lot like Yeezy but were not.

The sweater Hailey wore had the words "Unavailable" printed on it. It definitely screams Gen Y off the racks. With her Vous baseball cap and a discreet shoulder bag that is too small to be a gym bag, Hailey made her way to gym sporting an iconic look that looks exactly like Princess Diana except she was not bringing a large tote.

It is another styling update -- the mini bags spoke of rage!

This is not the first time that Hailey paid tribute to the late Princess Diana and her fashion style. In August of this year, the model appeared in Vogue Paris wearing one of her recreations of the royal athleisure look. But the latest remake of Princess Diana's look makes Hailey an official Diana die-hard fan.

Both women have made their own statements in the field of fashion. Their followers would agree that they both deserve to be called fashion icons in their own right. And yet, they take on each other's fashion sense.

gonna phone it in this Halloween and dress as hailey baldwin AS princess diana pic.twitter.com/wik4dydku8— &shampersand& (@ShamitaJay) October 30, 2019

The modern-day "update" that Hailey Baldwin-Bieber gives to the classic athleisure style of Princess Diana only shows how women take after each other. The "Hailey updates" are just as stylish.

Hailey is making a name for herself in the field of fashion. And although she may not be fully aware of it, she channels the style and grace of the late Princess Diana. She would have been proud of the young fashion icon that Hailey Baldwin-Bieber is becoming.