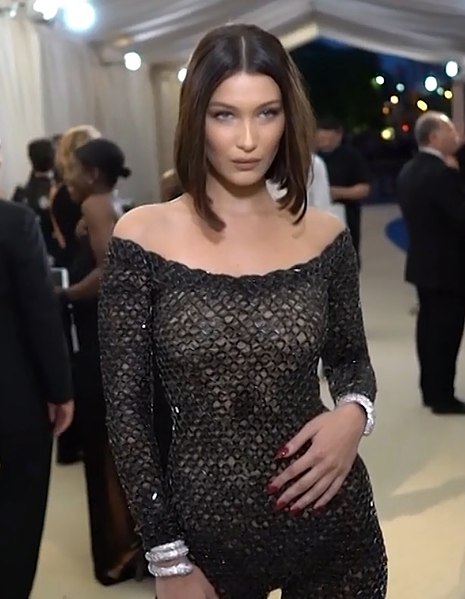 Bella Hadid is undeniably one of the sexiest in Hollywood.

The supermodel has made a name for herself in the fashion scene for her bold wardrobe choices. Everyone looks forward to her attires, as they are always fashion-forward. Put simply, she is giving everyone a run for their money.

This young model was recently spotted wearing a thong bikini, and it looked good on her in every angle.

Bella Hadid's pants are about to fall off, but she does not look like she cares at all. In fact, it looks like it is all part of her plan to push fashion-forward. Her bumsters are slouching towards the beach sand, and she could not care less.

The photos of Bella with her thong bikini can be seen at Vogue.

Bella Hadid Sizzles at The Beach

Spending the day at the Art Basel in Miami with Kendall Jenner, Hadid was spotted wearing a pair of jeans that were barely hanging by a thread (this quite literally).

In truth, they were fastened in place by what looks like a shoelace. What is the catch? The denim pants that looked like they were about to fall exposed thong-Esque black bathing suit that Hadid was wearing underneath.

She was wearing a matching black bikini top. A Dior leather tote was hanging by her shoulder, and it completed the sophisticated look for the beach.

A pair of Nike Air Force 1s added a layer of street style to her sexy outfit for the beach. The model wrapped a silk bandana on her head to keep her hair in place.

Hadid was seen walking around Miami Beach with her very visible bikini bottom, one that definitely got people's attention. However, no one was surprised with her choice of clothing, especially those accustomed to the swimwear picks she has had in the past.

After soaking in the sun and cuddling with her best friend, Bella headed to the water. This time, the girls rode the jet-ski and got wet and wild.

Both models Kendall and Bella looked incredible while lounging at the sunbeds together. Both girls are reportedly single at the moment. Clearly, it was a much-needed holiday for the girls, and they picked just the right swimwear.

Bella's unique taste for swimwear has made it to the headlines before, and for good reasons. Her style has been associated with shocking swimsuit silhouette, including well-loved bottoms with French cut.

The signature thong straps in a bikini are a signature of Y2K fashion. In fact, such bottoms have walked the runway of top world designers -- including Gucci, Christian Dior and Jean-Paul Gaultier.

Sisqo's "Thong Song" that topped the charts for several weeks prompted the sale of thongs two decades ago. It recently celebrated its 20th year. The thong silhouettes never really went out of style, though they have somehow made a comeback for the last few fashion seasons.

Who could forget the sky-scraping pink thong that Hailey Baldwin Bieber wore at the Met Gala a few months back? Fashion fanatics would be surprised to know that this sexy underwear is not just for women alone.

In the Spring 2020 collection, Heron Preston showed off ready-to-snap strong thing for men. Because even men can pull it off.

Versace's collection for 2020 also included the thong. They came with sparkly straps and were modeled by none other than Bella Hadid herself.