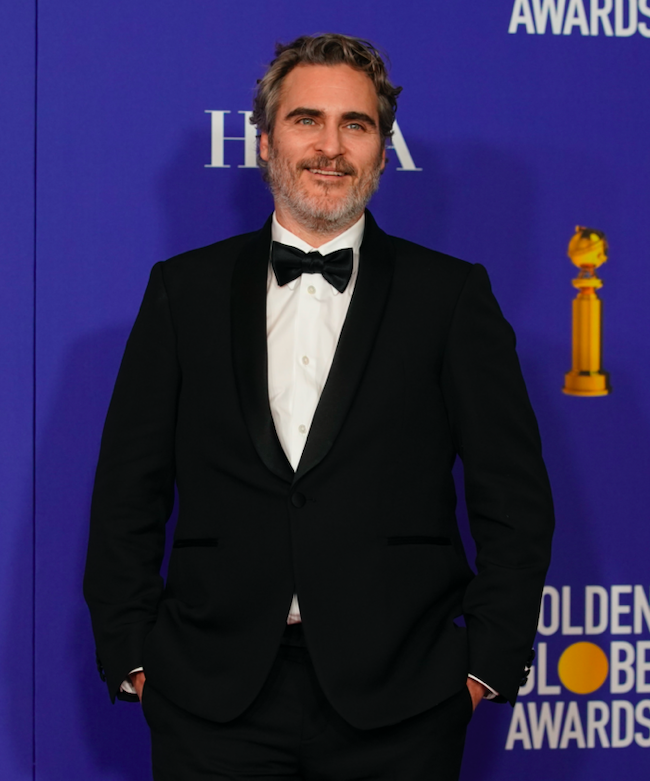 For some good news for the planet, in conjunction with a general plea for sustainability, "Joker" actor Joaquin Phoenix has vowed one thing.

From plant-based dinners to speeches that mentioned the Australian bushfires, an important topic at the Golden Globes was climate change.

After Sunday's ceremony, it was reported that Joaquin Phoenix plans to wear the same tuxedo throughout the 2020 awards season in an attempt to reduce waste.

Phoenix is a long-time vegan and eco-warrior. He continued his activism while wearing something formal on stage. He kicked off his acceptance speech by thanking HFPA for "recognizing and acknowledging the link between animal agriculture and climate change."

"It sends a powerful message," Phoenix said as his peers applauded.

Teaming up with sustainability-minded designer Stella McCartney, Phoenix's tux is a classic red-carpet look go-to, with its well-tailored and timeless look. However, it is not the most memorable outfit on the red carpet.

His tuxedo may look typical, but the entire suit is now laced with a feel-good meaning.

McCartney revealed on Twitter after the awards show that the 45-year-old actor's style is eco-conscious.

This man is a winner… wearing custom Stella because he chooses to make choices for the future of the planet. He has also chosen to wear this same Tux for the entire award season to reduce waste. I am proud to join forces with you... x Stella#JoaquinPhoenix #GoldenGlobes pic.twitter.com/Ymbkl78ecN — Stella McCartney (@StellaMcCartney) January 6, 2020

On McCartney's website, she said: "By taking the stance, we are proving it is possible to create beautiful, luxurious products that are better for everyone - animals, people, and the environment."

The fashion designer is a pioneer of sustainable design since launching her Stella McCartney label in 2001. She is also vegan, and the company never uses leather, skin, fur, or feathers.

The label also uses a tool to measure its impact on the environment from air pollution, waste, greenhouse gas emissions, water use, land use, and water pollution.

Fans are happy about what Phoenix and McCartney have done.

One tweet celebrated Joaquin Phoenix for stopping the madness of celebrities throwing their tuxedo in the ocean.

Another tweet wrote about marking "yesterday" a history because Phoenix chose not to throw an actual tuxedo away like the "wrapper of a slice of cheese."

The one-tuxedo-only trick might not be feasible for the rest of Hollywood's bold-clothes wearers. However, the idea of wearing clothing that is part of the wardrobe is indeed good for the planet and suitable for the style.

Unforytunately, not everyone can believe what McCartney and Phoenix are trying to do.

Former "Today" host Megyn Kelly, on the other hand, thinks that Phoenix's latest attempt at battling climate change is an empty gesture.

"How out of touch are these people? Oh, the sacrifice! Just ONE tuxedo! Spare us!" Kelly exclaimed, showing that she is clearly against and doubtful about the move

Journalist Emily Zanotti replied: "I'm going to re-wear my Stella McCartney jeans (that I got secondhand for $35) today, just to feel like a climate change hero."

A Twitter user mentioned that firemen, police, soldiers, doctors and nurses have been using the same uniform throughout their career so "why does Phoenix have to be celebrated" for something that ordinary workers have been doing?

Sustainable fashion is a new buzzy concept that seems to get harder to define, but part of that uncertainty means that people are coming up with new ideas all the time.

READ MORE: Out Of Options? Rob Kardashian Struggling in Battle to Lose Weight