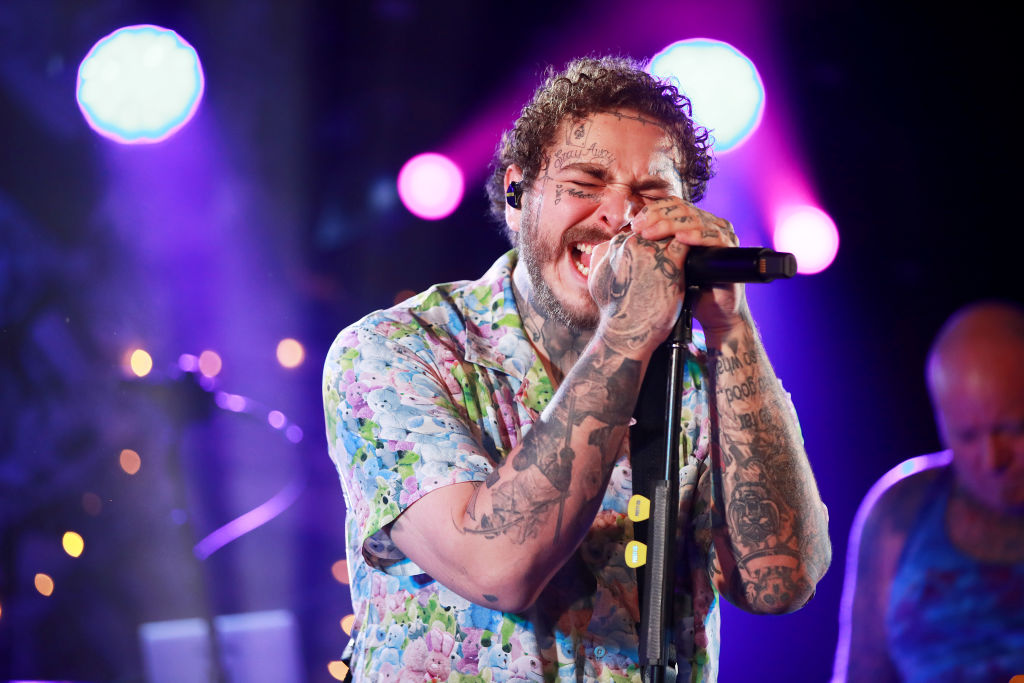 Post Malone -- renowned American singer, rapper and record producer among other things -- has quite a number of tattoos on his face, neck and arms. Most of these were his own work!

While tattoos are great and now becoming quite mainstream, even with the occasional stereotypical judgement thrown at those with tattoos, face tattoos are still quite rare. Most people who have inks all over their bodies would rather skip the face.

But Post Malone has several face tattoos. They are certainly not just random marks he put on to look fierce or cool, but each and every one of them means something.

With that said, we take a look at Post's tattoos on his face and check what each means.

Post Malone has a "Stay Away" tattoo above his right eyebrow. It's big and it can be read even if you do not squint so hard at his face. While fans think it is supposed to repel nosy people away from his business, Post Malone himself clarified that they are just simple "song lyrics."

One funny backstory to this tattoo is that he only got it to piss his mother off, who did not like that ink at all. In an interview, he apologized to his mom for getting inked on that area jokingly.

Another quote tattoo has found its way to Post Malone's face, this time the tattoo is under both of his eyes. On the right is the always and on the left is tired -- "Always Tired."

Again this led fans to speculate that he is already tired of his life and career, but Malone said they could not be more wrong. At Wireless Festival hed back in July 2018, he said that the decision was purely mathematical.

"I tried to do something that's relatively the same length of letters (under each eye), but I guess always is more letters than tired...but I was tired, so I didn't realize."

Of course, he was joking, but we told you not all tattoo meanings are meant to be shared

Post Malone also got a barbed wire tattoo on top of his forehead. You might think it's something that Jesus Christ had on while he was being made to suffer, but it's not.

Many speculated this must mean the singer is feeling limited and barred by certain things he no longer wants to deal with. People also assumed that this is a cry for mental help. So far though, Post Malone is just letting these rumours fly.

Probably the cutest tattoo he has on his face is the small smiley face. It's inked just near his right eye and probably easier to miss than his other tattoos.

Below this cute smiley tattoo is a playboy bunny tattoo. While Malone did not bother explaining this tattoo once more, people just assume he loves Playboy Bunnies and labelling himself as a certified ladies' man.

The said mini heart tattoo is found under the bunny. Because technically heart means love anyway, unless it is different on Post Malone's world, then this must mean he got heart.

On top of the "Stay Away "tattoo is an Ace of Spades card. He has not explained this or maybe people haven't asked, but in general, this tattoo means luck and fortune, so.

On the right side of his face is a dagger/sword tattoo. People speculated it means being strong, but as turns out, his reason for getting was pretty simple: he loves sword and he has a collection of it since 12.

The only known thing about this tattoo on the left side of his face was that it was made by a Japanese tattoo artist in Tokyo. It looks quite dark though, like the menacing appearabce of trees at night.