Oprah Winfrey revealed that she scored an exclusive interview with US Olympic gymnast Gabrielle Douglas for "Oprah's Next Chapter."

The television mogul tweeted the details in under 140 characters: "@Oprah sits down with Olympic Gold Medalist @gabrielledoug, on an all-new episode of #NextChapter - Sun 8/26 at 8:30/7:30c!"

Winfrey will have plenty to discuss with the "Fab Five" member.

The 16-year-old is the second black American to ever make the United States' Olympic gymnastics team, and is one of the most talented gymnasts in America. However, Douglas made headlines with controversy surrounding her hair, her father showing up to support her at the Olympics after being absent most of her life, and her mother filing bankruptcy in January.

Comments about Gabby Douglas' hair made headlines following her gold medal victory in the individual and team all-around competition. Despite winning 2 Olympic gold medals for USA, people criticized the state of her hair, rather than her amazing achievements.

According to TMZ, her mother Natalie Hawkins had filed for bankruptcy. "So, my mom had to front all these bills," Douglas said. "My dad didn't really pay the child support. He was short [on money]. It was definitely hard on my mom, taking care of me and my siblings."

Gabby's father, Timothy Douglas, was reportedly arrested in March for non-violent child abuse charges. Daily Mail exclusively reported that the father of the Olympic gymnast has been investigated by Child Protective Services and a warrant for his arrest was issued on March 6, 2012.

The warrant charge was listed as 'contributing to the delinquency of a minor' with a sub-clause that he 'rendered a child under the age of 18 abused or neglected.' Although details about the case cannot be revealed, Barnes says that the charge can be anything from physically disciplining a child to leaving them unattended.

Gabby Douglas' father was in London to see her amazing performance to win the gold medal in the women's gymnastics all-around at the Olympic 2012 Games.

Her father had been serving in the Air Force, but he managed to witness his daughter make history by becoming the first African-American woman to win the all-around gold. He held up a banner in the crowd saying "Go Gabby Douglas, Love, Dad" surprising his daughter who did not even know he was there at the event.

The 56-year-old sits down with the "Birthday Cake" singer in her hometown Barbados. The interview will be the first time Winfrey speaks to the award-winning singer since her 2009 incident with Chris Brown.

"Oprah's Next Chapter" featuring Rihanna will air on Sunday, August 19 at 9/8c on OWN. 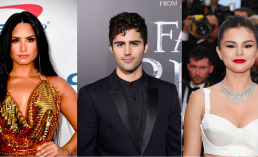