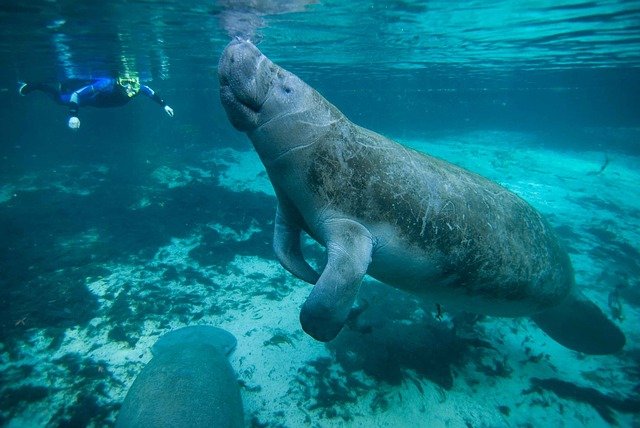 As endangered species, manatees face various human-propelled threats, environmental threats, and other dangers that can further impact their population. Many manatees are injured or killed by boat propellers, as boaters don't see them right below the water's surface. Some manatees are poisoned via run-off from fertilizer, sewage, algae blooms, and other pollutants more commonly seen near populated areas. Climate change has also caused some traditional waters to grow colder or reduced food sources, causing many manatees to migrate to new places that may contain even more hazards.

Luckily, since the 1970s, worldwide efforts have been undertaken to try to help manatees. Education efforts have reiterated the need to limit human interaction, while legislative efforts have resulted in significant fines and jail time for individuals who deliberately hurt or harass manatees.

While manatee populations are slowly increasing, more effort is needed to keep them stable. This requires management from wildlife agencies and support from conservation groups and organizations, such as SeaWorld.

Although some lawmakers have suggested reducing regulations because the populations are growing, manatees are still protected under the Endangered Species Act and the Marine Mammal Protection Act.

The manatee is from the family Trichechidae, in the order of Sirenia. There are three species within the manatee group, including the West African manatee, the West Indian manatee, and the Amazonian manatee. The more common varieties in the southeast U.S. are West Indian. The Trichechidae family also includes dugongs, which are different from manatees, with dugongs having a fluke-shaped tail.

Manatees typically weigh between 800-1,200 pounds and are 9-10 feet long but can grow up to 15 feet in length and weigh up to an estimated 3,900 pounds. Unlike many mammals that have seven vertebrae, manatees have six. They also have a simple stomach, like a horse, designed for eating plants. They are considered herbivores and have flat teeth intended for a plant diet. Though they can swim up to 20 mph, they typically move slowly through the water, primarily for grazing purposes.

Manatees spend most of their day submerged, preferably in shallow water, and only come up for air approximately once every 20 minutes. The mammals prefer warmer water, and cold water can slow them down or even kill them. They also can move easily between saltwater and freshwater environments. The manatees' migratory range in the U.S. is often along the Gulf Coast, between Florida and Texas, typically close to shore.

SeaWorld Parks and Entertainment spearheads efforts to research, rescue, and rehabilitate manatees. The parks have received authorization to rescue manatees that have been injured or orphaned, with the goal of returning them to their natural habitat whenever possible.

The company is an active member of the Manatee Rescue and Rehabilitation Partnership, an organization that includes state and national public agencies and various animal rescue groups.

SeaWorld offers a rehabilitation program that expertly cares for rescued and injured manatees, and when appropriate, releases them back into the wild. As of 2000, SeaWorld Florida has rescued and released more than 80 manatees. As of spring 2021, SeaWorld Orlando has rescued 18 manatees, with 26 rescues throughout the prior year.

SeaWorld Orlando has an especially extensive manatee rehabilitation area at its 5-acre Rescue Center. Guests can view this area during tours, offering a firsthand look at rehabilitation efforts. The facility contains equipment for X-rays and surgery, medical pools with lifting floors, and feeding areas. The park is also a designated critical care facility for injured manatees.

Manatees may also be found at some of SeaWorld zoos and aquariums, which give the public a chance to learn about the mammals, raising awareness of their needs. SeaWorld educated guests on ways they can do their part to preserve manatee populations. This includes watching the water closely when boating in areas where manatees are known to graze. Boaters and beachcombers can also dispose of fishing lines and plastic, which can hurt manatees and other aquatic species.