Word is daytime talk show The Real has found a new co-host. And it might surprise fans.

Singer and reality star Ray J hinted that he could be joining the ladies: Tamera Mowry-Housley, Adrienne Bailon, Loni Love, and Jeannie Mai, regularly. He took to Instagram to announce the news.

The singer shared a snapshot of him and his reported new co-hosts via Instagram. He added in the caption that he “got a new job” at the talk show. There is speculation that he will provide a male perspective on the show that targets females.

Looks like a got a new job!!! Stay tuned!! #TheRealwithRayJ #telepictures #DaytimeTV

His post comes just days after he made an appearance on the show late last month. During the appearance, he and his wife, Princess Love, received lots of attention as he announced that they were expecting their first child together. Fans followed Ray J and Princess Love’s journey to parenthood as they revealed they were having issues conceiving on the most recent season of VH1 hit series, Love and Hip Hop: Hollywood.

Why Tamar Braxton Is Fired From The Show

If true, news of Ray J filling in the fifth chair permanently would be pretty interesting. Former host, Tamar Braxton's, firing back in May 2016 was one of the most shocking daytime talk show moves to date. Her termination was certainly news to fans as the reason for executives’ decision still hasn’t been reported to the public.

There have been rumors that Braxton rubbed advertisers such as Pinterest the wrong way. One insider said Pinterest was the lead advertiser for one particular game the show aired for a segment. They revealed Braxton was livid after she lost the game and went off in front of the audience and backstage. This was said to be just one of Braxton’s many “outbursts” on the set of the show.

Insiders also said that Braxton and her vernacular such as “get your life” were not good fits with the audience of educated, working women the show hoped to reach. The research reportedly said Braxton was described as “ghetto” and pointed out her “aggressive eye-rolling, neck-rolling and the smacking of her mouth” as “stereotypical heavier that African American women have worked years to overcome.”

Since then, entertainers like Monica Brown, Ashanti, Mel B, and Eve have reportedly been in talks to replace Braxton. As of now, neither the show nor the co-hosts have not confirmed Ray J’s news.

Be sure to keep up with Enstarz for the latest on your favorite celebrities. 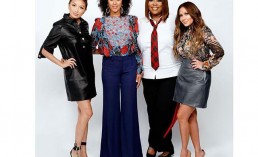