New mom Mindy Kaling has been finally seen in public since giving birth to her baby girl in December 2017. The actress was with her A Wrinkle in Time co-stars for a fun day at Disneyland to promote their upcoming movie.

The 38 year-old actress was all smiles while at the Sunset Showcase Theater in Hollywood Land as she and her cast-mates hosted a panel and a surprise screening of the film. Later, the ladies took pictures in front of Sleeping Beauty's castle with dozens of fans.

Kaling wore an L.K. Bennett dress and also had a pair of mouse ears on her head.

The Mindy Project actress gave birth to her daughter, Katherine, on December 15, 2017. She revealed her pregnancy on the Today Show in August 2017. Kaling decided to name her daughter after her mother who passed away in 2012 after a battle with pancreatic cancer.

The actress has not revealed who the father of her child is, nor has she been romantically linked to anyone publicly.

Kaling will portray Mrs. Who in the upcoming science-fantasy film. The movie follows the journey of young girl, Meg Murray, whose astrophysicist father, Alex, was held captive on a distant planet ruled by a universe-spanning evil. Meg must work together with her younger brother and classmate to save him and the universe.

A Wrinkle in Time is based off the best-selling novel by Madeleine L'Engle that was published in 1962.  Also starring in the film are Chris Pine, Gugu Mbatha-Raw, Michael Peña, Levi Miller, and Zachary Galifianakis.

The Mrs's and Meg surprised fans @disneyland. Check out our story for more #wrinkleintime A post shared by A Wrinkle In Time (@wrinkleintime) on Feb 22, 2018 at 4:45pm PST

© 2020 ENSTARS, All rights reserved. Do not reproduce without permission.
TAGSmindy kaling the mindy project A Wrinkle in Time
SEE COMMENT
CLOSE COMMENT 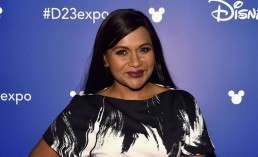 Mindy Kaling Hides Identify Of Daughter's Father, So Fans Make Their Own Predictions 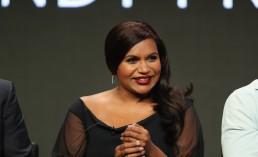