A day after he was arrested, Kristina Bobbi Brown's ex-boyfriend, Nick Gordon, has his calls to 911 surfaced, seemingly him turning as the victim.

In the audio, Gordon can be heard "tearfully" informing the other end of the line about his girlfriend, Laura Leal, who allegedly became chaotic in their house. He also admitted he felt "lame" as he was hit by a woman and that they were inebriated.

"I feel so lame because I'm getting beat up by a woman. She just threw a bottle at me," Gordon said, almost sobbing.

He added that Leal became restless and seemed crazy during their altercation and explained he didn't do anything wrong. What was recorded during the 911 call matched his statements at the arrest report.

DailyMail insisted he called 911 twice. Gordon was reportedly at times loss for words and sometimes mumbling as he recounted what happened in his house. Leal can be heard shouting at him constantly and then she can be heard coming for Bobbi Kristina's ex, with the guy claiming she ripped his shirt. After which, the line was dropped.

A second call had Gordon crying and this was when he said he felt bad for being hit by a woman. When authorities came, it was him who was arrested. He also did not press charges against his girlfriend.

In the documents, Gordon claimed Leal threw a bottle at him and tore his shirt off. He explained he just wanted her to leave his home and that he didn't beat her.

However, Leal's statements were a far cry from his. She narrated that she picked Gordon up from a bar and on the ride home, the 29-year-old allegedly pulled her hair and "struck her in the right side of her cheek several times."

Upon reaching home, Leal shared, the couple got into an altercation. She did not press charges against Gordon, but the responding officer noticed that the woman's lower lip was swollen and had dried blood, prompting for an arrest.

Leal and Gordon have been dating for a year and have been living together for six months. But in the course of the past year, this was the second time the two got the attention of authorities.

In June 2017, Leal filed a report against Gordon, accusing him of beating her and keeping her in his house. Photos of her bruises surfaced, but the woman became uncooperative by August that the charges were forced to be dropped.

Meanwhile, Gordon might be a resounding name as he was the ex-lover of Whitney Houston and Bobby Brown's daughter, Bobbi Kristina. The 22-year-old personality was found unconscious face down in her bath tub in her home in Georgia.

Prior to this incident, Gordon was accused of beating Bobbi Kristina. The high-profile celebrity's family, of course, would not take things seating down. A 2016 lawsuit has the 29-year-old "legally responsible" for her death and was required to pay $36 million to her estate. 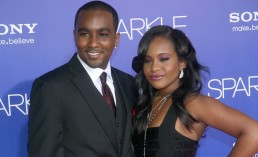