Gwen Stefani is facing rumors claiming she's not only pregnant but also planning to marry boyfriend Blake Shelton in Mexico.

According to a new report from Life & Style magazine, Stefani and Shelton recently learned they were allegedly expecting their first child together and are now supposedly planning to tie the knot in a "quickie beach ceremony" in either Tulum or Playa Del Carmen.

On the cover of the latest issue of the magazine is a photo of Stefani and Shelton taken during their January trip to Mexico, which featured Stefani on beach. However, as Gossip Cop pointed out, the photo was actually photoshopped, and while the original image seemed to include an alcoholic beverage in Stefani's hand, their photo did not show the beverage.

“[A] romantic destination wedding is in the works,” the Life & Style magazine insider said.

Is Gwen Stefani Having A Baby?

While Stefani has not said a thing about a potential pregnancy, the source said that friends of the singer, who already shares three sons with ex-husband Gavin Rossdale, are convinced she is expecting. In fact, they allegedly think that the only reason why Stefani and Shelton are "finally" getting married is because she's pregnant.

“[Gwen’s] dream is to marry Blake and have his child. And announcing her pregnancy to friends and family on the big day would make the wedding all the more special,” the source claimed.

The insider then said that the couple of about two and a half years is supposedly planning to tie the knot this summer with just “22 friends,” including past and present stars of The Voice.

Last fall, while chatting about his relationship with Stefani on 99.5's The Wolf, Shelton denied that he and Stefani were ready to wed. In fact, he said he didn't think that he and his girlfriend would be calling a wedding planner anytime soon.

In addition to Shelton's denial months ago in regard to a potential wedding, a rep for Stefani recently spoke to Gossip Cop, confirming that OK! Magazine's report about her potential pregnancy and plans for a wedding were “untrue.”

To see more of Shelton, tune in to new episodes of the 14th season of The Voice on Monday and Tuesday nights at 8 p.m. on NBC. 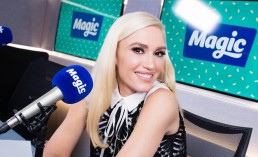 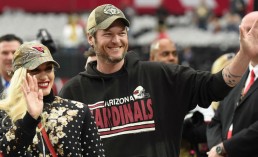