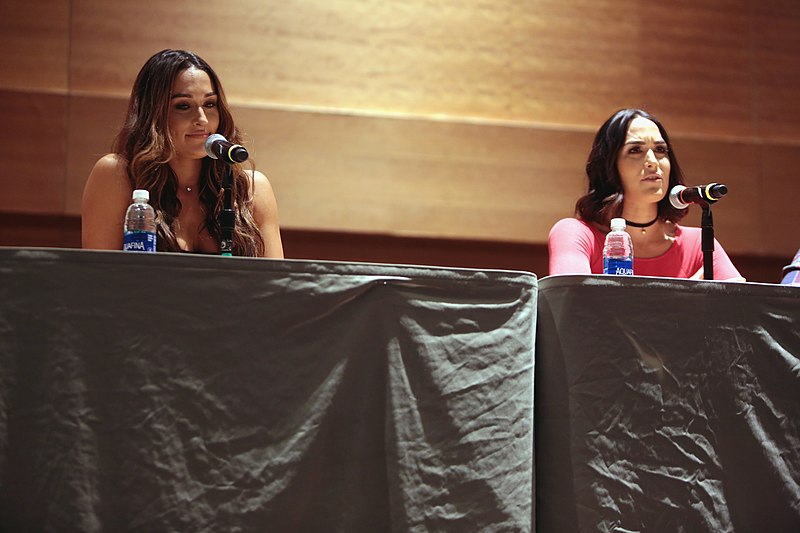 It might seem like a scene taken directly out of a movie, but WWE twins Nikki and Brie Bella are pregnant at the same time.

Interestingly, their due dates are roughly two weeks apart!

In an interview with PEOPLE on Wednesday, Brie Bella confirmed that she and her twin sister Nikki are both pregnant. She revealed that they, too, were surprised to find out that they were pregnant at the same time.

"People will think it's a joke!" the former WWE star said. Brie also hinted that people might think that they planned it, but they did not.

Brie is married to professional wrestler Daniel Bryan. The couple has been trying to conceive for eight months but there was no positive result until now. The couple share a two-year-old daughter named Birdie.

After not being able to get pregnant, they decided to stop trying. They thought that maybe trying for more is not going to work.

"We were in France to meet Artem, Nikki's fiance, when I felt a little off," Brie narrated. She added that she felt irritated all the time and was uncomfortable with her body.

At that time, Brie had no idea that she was pregnant at all. When they got home from the trip, the former WWE star said that she decided to take a pregnancy test two days before Thanksgiving and that was when she saw the positive sign.

Nikki, on the other hand, revealed that her pregnancy really came as a total surprise for her. She added that it took her a good two weeks to come to terms with the situation.

"Oh my gosh I'm pregnant. I'm not ready for it," Nikki revealed.

Nikki and her fiance were not trying to conceive at all, but her gut feel pushed her to take a pregnancy test. Initially, she assumed that the irritability and mood swings were because of her twin's pregnancy rubbing off on her.

"I didn't tell Artem about it. I felt I had to do it on my own," Nikki shared. And then she had to break the news to her fiance. She entered the room, "sit down for a second" and announced the news to Artem that she was pregnant.

"I couldn't imagine my life without experiencing childbirth and raising a child," the retired WWE pro added.

Nikkie and Bries' twin vibes are now stronger than ever. They practically go through the same pregnancy symptoms together, as they have been feeling nauseous all the time.

Nikki also opened up about the pregnancy symptoms she has been experiencing, saying she has been feeling sick most of the time. Despite that, however, she cannott help but feel excited about the growing person inside her.

"I am excited to have this person I will take care of for the rest of my life. That's amazing!"

The twins have announced their retirement from WWE last year after Nikki learned about her brain cyst. Taking a step back from the wrestling scene has not slowed her down one bit, however. The Bella Twins continue to be active as they became part of USA Today's Wine and Food Experience.