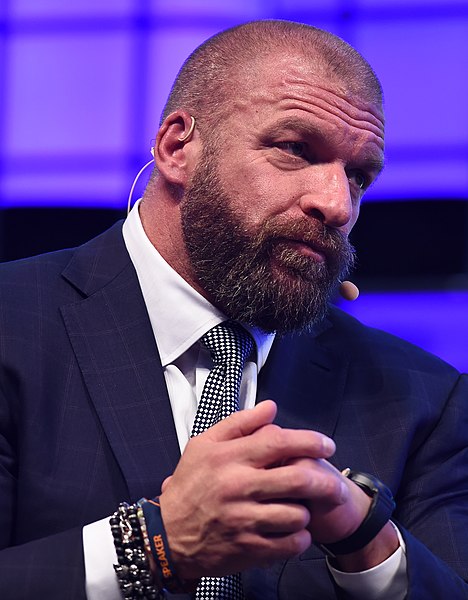 Paul "Triple H" Levesque has found himself on the headlines for making an off-color joke about retired WWE star Paige.

Ahead of a wrestling event in England this weekend, the former wrestler and current Executive Vice President of talent, live events, and creative for WWE made some unnecessary remarks about Paige.

During a sit down with the reporters, Triple H talked about the possibility of Paige and fellow retired WWE star Edge returning to the ring. Although both have been reported to suffer from neck injuries, Triple H said that their fans might just be seeing them again in action inside the ring.

"When you're talking about people as talented as Edge and Paige, who wouldn't want them to return? I'm a fan, just like everyone else. Yeah, I'd love to see them step in the ring and compete," Levesque said. "More importantly than that though I'd like to see them live long healthy lives."

What prompted everyone to laugh, however, was when Triple H talked about the lives of the two ex-WWE stars.

"Edge has kids, you know. Paige -- she probably has but is not aware of," he joked -- a statement which sparked calls of slut-shaming

Paige is not new to the slut-shaming and negative commentaries about her since the scandal she suffered in 2017 when intimate photos and videos of her were leaked in public. However, this time, the 27-year-old wrestling personality spoke about Levesque remarks of her.

"Even my boss jokes about me. It's no wonder you guys still do it too," Paige said as she called out the unnecessary, below-the-belt comment of "Triple H." She posted the message alongside the clip of the WWE executive making the "joke" about her.

Moreover, Paige has found support from fellow retired wrestlers Brie and Nikki Bella, who competed in the WWE ring as the Bella Twins. They responded to the comments made by Triple H and said that in order for women in their industry (or in any other industry) to get the respect they deserver, change must start from "from the top."

We will never see the true change in equality if we just see them as storylines. Change in a company starts from the top. Our leaders help set the example. For us women we need all the help we can get. Help with respect from our co workers and fans. We are all one. One love. ️N— Nikki & Brie (@BellaTwins) January 13, 2020

Renee Young, a WWE on-air personality, also spoke out and called for people to stop making jokes about what Paige has been through,

"Big love to Paige. She's been to hell and back but still some people wanna make jokes. We need (and she deserves) real change," Young wrote on Twitter.

Following the backlash, Triple H issued his public apology on Wednesday. He admitted that he made a terrible joke and was sorry if it offended Paige or anyone else.

I’ve reached out to @RealPaigeWWE to apologize. I made a terrible joke and I’m sorry if it offended her or anyone else.— Triple H (@TripleH) January 15, 2020

Paige has not issued any formal response to the public apology. However, while she was speaking with the media amid the controversy, she admitted that she was "perplexed" and obviously "taken aback" by the comments made by Triple H.

Paige continued by saying that she has reached out to him and they both remain hopeful that they could talk about some things that will bring about real change.