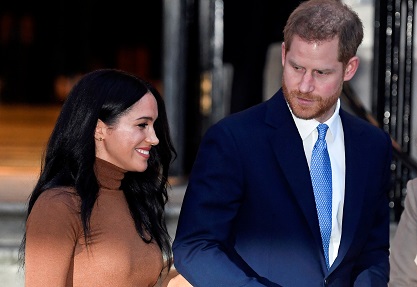 Prince Harry and Meghan Markle have everything planned out. However, the recent decision of the Queen seems to have interfered with what could have been their version of a good life.

The Duke and Duchess of Sussex have been accused of being disrespectful after their bombshell announcement on Instagram. The couple shared an extraordinary post on Friday on their website, hinting at the tension during the negotiation of their new roles once their resignation as senior members of the royal family is finalized.

It may seem as if their post is also out to hit on the other royals who have been allowed to seek outside employment. When the couple emphasized that they should still be legally allowed to refer to themselves as "Royals" wherever they may be, critics have called them out. It was as if they were aiming right at the Queen.

In the same post, they emphasized that although they have trademarked the name "Sussex Royal" as their own and are legally allowed to use it whenever they want to, the couple will not do so -- as the Queen wishes.

Angela Levin, the royal biographer, told Sky News that she feels the Queen will be saddened by the couple's latest statement. She branded it "petulant and spiteful."

Levin told Kay Burley that the Queen had no intention of ostracizing them. "In fact, she wrote that she loved them dearly and wanted them to be in the family," the royal biographer highlighted, referring to the Queen's statement when they announced their decision to step back as senior royals.

"They seemed to not look at that part and focused more on the dark side, looking out of what they missed out on," Levin furthered.

Their desire to become financially independent has pushed the couple to remove themselves from the royal family. Although they still wish to serve the Queen and provide support to her endeavors, Harry and Meghan have their own desires and wishes as their priority.

A part of the statement they released pointed out the "unfair" treatment that other members of the royal family received. They particularly emphasized that other royals have been allowed to seek financial gain through outside work, subtly referring to the work of Princess Eugenie and Princess Beatrice.

"While there is a precedent for other titled members of the Royal Family to seek employment outside of the institution, for the Duke and Duchess of Sussex, a 12-month review has been put in place," the statement read.

A source of The Daily Mail said that it was the couple's decision to break away from family traditions and everyone's trying to facilitate it.

"But it inevitably requires sacrifice from both ends and the Sussexes need to be more gracious about it," Levin said.  "Sniping from the sidelines is not going to help anyone."

Another royal commentator, Richard Fitzwilliams, added that "there was no need to underline it like they did because the agreement will really be reviewed after a year."

The former editor of International Who's Who added "it only emphasizes that the division is really there within the royal family. The tone that Sussex has taken is that they were unhappy. They made it known every step of the way."

Will this new development in the talks among the royals end up making everyone happy? Royal analysts say that in the long run, people will get hurt.