Orange Is the New Black star Kate Mulgrew had an unconventional childhood, to say the least.

Mulgrew, who plays Galina "Red" Reznikov on Orange Is the New Black, spoke recently about being born with a full set of teeth.

"They're pearlescent, they're blue," the actress told ITV recently, of her teeth. "And they're very dangerous because the baby can swallow them."

Mulgrew said that she was unable to sense pain for the first few years of childhood, prompting her parents to put her in a protective cage.

Mulgrew delves more into her unusual childhood in her recent memoir, Born With Teeth.

Meanwhile, the actress also discussed why she loves playing Red on Orange Is the New Black, "Feisty's complimentary, she's rather frightening."

But Mulgrew is not alone in loving the character she plays - this extends to the rest of the cast as well.

"We're captivated by our own characters," she said. "We know how lucky we are. We're used to watching television looking at people so far above us that we can't possibly relate to them, and anyway why would you want to? They're too perfect to look at, too perfect to listen to!"

The actress took the time to praise star Taylor Schilling (who plays Piper Chapman) in particular.

"That takes great dexterity, she's walking a fine line. She's the white upper-middle class pretty girl who's in prison for 15 months and so of course she's universally despised, certainly by us," Mulgrew admitted. "But the fact is as an actress she carries it so beautifully."

Orange Is the New Black season 4 is set to drop Friday, June 17 on Netflix. 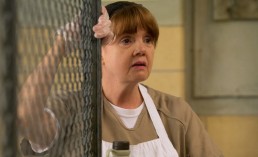 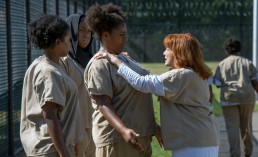 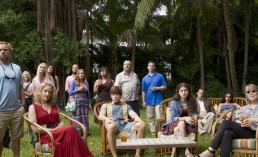