She was already horrified to learn that her ex had somehow managed to worm his way into the position as the new District Attorney, but now, Hope (Kristian Alfonso) will have even more reason to be concerned by Aiden's (Daniel Cosgrove) powerful new post on Days of Our Lives.

Aiden got the job by getting evidence of Justin's (Wally Kurth) wrong-doing, and is taking the post at Andre's (Thaao Penghlis) request. His first order of business has been to reopen some older cases that were considered either closed or cold-and the top of his list is figuring out the truth behind Stefano's murder.

Hope murdered Stefano in a rage when she believed he had been the one responsible for Bo's kidnapping, which led to his own eventual death not long after he got back to Salem. Rafe (Galen Gering) helped her cover up the murder and even plant evidence against Andre that suggested he had killed his father. Aiden quickly helped Andre out after he returned to by getting someone else to confess to the crime so Andre could go free, and now that he is the D.A., he is looking into the case one more time.

Hope will be alarmed by his decision to look into things again because his doing so is not only risking that he unearths her biggest secret and potentially gets to find a way to truly ruin her life after she rejected him, but that he could wind up taking down both Rafe and Roman (Josh Charles) in the process, since they both helped her cover up this secret for months.

However, there will be nothing she can do to stop Aiden from looking into things for now, and when he starts digging, he may uncover the truth rather quickly, and when he does, he will decide to confront his ex-wife, and could potentially hold the keys to turning her life upside down for good. 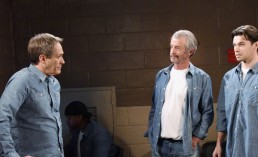 'Days of Our Lives' (DOOL) News: EP Says Show was 'Painful' To Watch Before Changes? [VIDEO]