While AMD Ryzen chips are ready to hit the market around March 2017, Intel is set to stop its close rival on its track with the launch of high-end Skylake-X and Kaby Lake-X processors in the form of four Core i7-7000 chips. Confirmed release for the powerful CPUs is said to be August this year, all four in this will be powered by the flagship HEDT X299 platform.

AMD Ryzen is ready to take on Intel Kaby Lake at some points, according to Forbes, during the launch; Ryzen has a significantly impressive hardware set that makes it an eligible contender. As for Intel, this could be clear proof that the Core architecture legacy will be endangered.

According to Trusted Reviews, the Ryzen will be a 3.4GHz+ chip with 8 cores, 4MB of L2 and 16MB of L3 cache. To compete with Intel's top processors, the AMD is aiming to beat Intel's clock speed.

Compared to AMD's Excavator core, the Ryzen will improve by 40% per clock cycle with power consumption just the same. The performance boost will be partly from the 14nm process which fits more transistors onto a given piece of silicon. The new "Simultaneous Multu-Threading" architecture will also help in handling multiple tasks.

Another new technology for Ryzen is the Neural Net forecast that speeds CPU by forecasting instructions in advance. Partner that wilt Smart Prefetch, which anticipates the data's future location and store it in the cache. AM4 Platform is featured in Ryzen includes DR4 RAM, PCIe Gen 3, USB 3.1 Gen 2, NVMe and SATA Express

Tech Radar reports that Kaby Lake has an integrated full support for USB-C Gen 2 and is said to be "native". Thunderbolt 3 is also in support together with HDCP 2.2 and is both "native" in processor and the chip is also integrated GPUs better-suited to 4K video. This enables users to edit real-time 4K video using nothing more than integrated graphics. VP9 and HVEC 10-bit decode will also be in support.

Kaby Lake is built on the same 14nm process as Sky Lake, but with improvements in the manufacturing process, might as well consider it "14m+". Intel's developments have made to its Speed Shift Technology and its manufacturing improvements caused the performance of office products up to 12% and mundane task to 19%.

The corem7 and core m5 names are also replaced by Core i7-7Y75 to note the significant boost in its speed. At the present, it seems like, Ryzen is really a worthy opponent for Intel this time. However, majority of enthusiasts say that they would wait for AMD Ryzen's release before buying new chips. 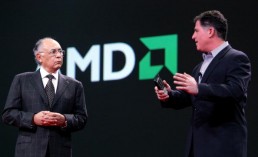