On Thursday, President Donald Trump made an announcement that has outraged many Americans. He decided to withdraw from the United States from the Paris Climate Agreement, a landmark accord nearly 200 countries have used to hold themselves accountable to confronting climate change since 2015.

Hollywood was quick to respond and celebrities have voiced their opinions all over social media. Leonardo DiCaprio, actor and environmental activist, previously addressed world leaders to join the Paris Agreement.

After hearing the news, the actor said, “the death of the whole nation on his hands."

“There has never in US history been such a destructive megalomaniac in the WH. Thank you to US press and other numbskulls who put him there.” Bette Midler tweeted on Thursday. John Legend tweeted and said that Trump is our “national embarrassment.”

Katy Perry tweeted, @realDonaldTrump I ask humbly to remember your children, their children & all children will be left to live w/the results of your decision.”

He managed to make a joke to lighten up the mood, however, he was more than serious in the rest of his video.

“He is the only man able to go back in time to stop 'our clean energy revolution' in reference to the Terminator's ability to time travel in his movies and Trump's supposed wish to halt 'progress' in terms of world carbon emissions.”

“My message to you Mr President is that, as a public servant, especially as a president, your first and most important responsibility is to protect the people.” said Schwarzenegger.

Not only is Trump’s withdrawal angering people in Hollywood, but it has outraged people across the nation. 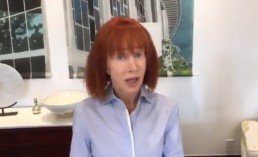