Is Kendall Jenner feeling like the odd woman out when it comes to her sisters' alleged baby news?

"Her sisters are excitedly planning the arrivals of their newborns,” a family insider revealed to LifeandStyle magazine on Nov. 8, “and Kendall feels like the odd one out.”

Jenner and Griffin began spending time with one another in August of this year, just weeks after the athlete reportedly split from his former fiancee, Brynn Cameron, the mother of his two children, son Ford, 4, and daughter Finley, 13 months.

“Blake and Brynn broke up in July. They ended things on good terms and they are still friends while raising their son and daughter,” the source said.

As for the possibility of Jenner and Griffin starting a family of their own, the insider said that while Griffin adores the model, he feels that starting a family at this stage in their relationship would be too soon. That said, Griffin enjoys being a dad and recently spoke of fatherhood during an interview with GQ magazine.

“This is what everybody says, and I didn’t really get it,” he told the outlet. “People were like, ‘Oh, it’s so life-changing. It makes you think about things in a different way,’ and you’re always like, ‘Oh yeah, totally.’ But then, when it happens, you’re like, ‘Woah. All of those people were right!'”

As for Jenner, she opened up about her future during a blog post last year, revealing her hopes to settle down and start a family.

"If I were building my perfect world on the game, this is how it would look: I'd have a beautiful, secluded house in Malibu with a gorgeous husband and a couple of kids," she wrote. "Seeing models like Cindy Crawford and Gisele [Bundchen] live chill but extremely fortunate and blessed lives seems like exactly what I would want."

To see more of Kendall Jenner and her sisters, including Kim, Khloe, Kylie, and Kourtney, don't miss new episodes of their family reality show, Keeping Up With the Kardashians, on Sunday nights at 9 p.m. on the E! Network. 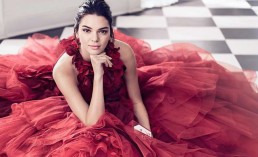