Rihanna is not happy with Chris Brown after her ex-boyfriend was recently snapped with his hands around another woman's neck.

The Barbadian singer, 30, reportedly flashed back to her own experience at the mercy of Brown's violence upon seeing the controversial photos taken in Miami on March 26.

Rihanna has not voiced her displeasure at the photos, but a source close to her talked to Hollywood Life and revealed that the "Work" singer is very upset at the incident.

"Rihanna just had all the bad memories dredged up by that horrible Snapchat ad," the source explains. "The last thing she needs is for people to be talking about Chris Brown being violent with women again. It's upsetting to her because inevitably it drags her back into something she really just wants to forget."

The relationship between the two singers came to a brutal end in 2009 when Brown punched, bit, and choked her repeatedly in an altercation in his car. Photos of Rihanna after the assault show her bruised and scarred.

Although Rihanna believes Brown's defense that he was only goofing off with friends in the recent controversial photos, the source says that she refuses to give him a pass on his actions.

"It's just a bad look — period," the source continues. "After everything they went through, she's disappointed that he'd even play around like that. It's just more proof to her that she made the right choice by moving on."

As the photos met criticism from the public, Brown is not apologetic.

The singer posted a photo on Instagram with his comment, saying that there's no need to even publicly defend himself since the people around him in the photo are his pals.

His lawyer, Mark Geragos, seconds the sentiment, pointing out that even the woman said so.

"She's a friend," he tells TMZ. "It's obviously playful as she confirmed. Whoever invaded their privacy will be held accountable."

While the pair has been through violence and intense public scrutiny, Rihanna and Brown enjoy an amicable relationship.

When she celebrated her 30th birthday last Feb. 20, he even wished her well by posting one of her childhood photos on Instagram. The photo has since been deleted.

In his 2017 documentary Chris Brown: Welcome to My Life, the singer admitted that his domestic violence and arrest left him feeling "like a f**king monster."

"I still love Rihanna," Brown also admits in the documentary, The Guardian reports. 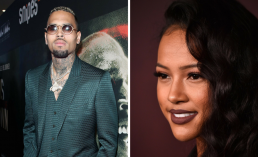