Rapper Cardi B has officially announced her pregnancy but it seems, a family member has inadvertently revealed the baby's gender already.

Giving The Game Away

The "Bodak Yellow" hitmaker revealed her pregnancy on Saturday Night Live, midway through performing live on the show. The moment came during her second song of the night, "Be Careful," which began with only her upper body on show for those tuning in at home.

The camera eventually pulled back to reveal Cardi B's white evening dress in full, which was designed by Christian Siriano for the occasion. Her considerable pregnant belly was very much showing and undeniable.

Now, it seems that Cardi's sister may have unintentionally revealed the baby's gender. Social media star Hennessy Carolina took to Instagram on Sunday to share her excitement over the big news.

"A baby is truly a blessing from god I know how much you always wanted to be a mom! You always been Like a second mom to me so I know u gonna be the best mommy everrrr. you took care of me like i was ur own daughter I know how much you LOVE babies," she wrote alongside a pic of the two women.

She continued on gushing about how good her sister was growing up, and how she can't wait to pass on her own love as an aunt. She also revealed something else in the process.

"I'm going to be able to hold ur baby and give the baby all the kisses and hugs! your pregnancy is mines we pregnant can't believe we're having a baby!" she added.

The trouble is the caption originally stated "her" instead of "the baby," which would obviously be much more general. Hennessy might have changed it after realizing her mistake.

Another clue came courtesy of Jimmy Fallon. The Tonight Show host gifted Cardi with a basket full of goodies, all of which seem to be for a baby girl.

"Okay, this is the first baby gift I have gotten from Jimmy Fallon so let's see what it is," Cardi B said in a video shared on Instagram.

She was co-hosting Monday's episode of The Tonight Show when Fallon gifted her the basket. The rapper has yet to confirm if she's expecting a boy or a girl, but it seems pretty clear a little Cardi is on the way.

This is the first child for her and fiancé Offset of Migos. He has three kids from previous relationships and tweeted that he is looking forward to the next chapter with Cardi B.

They hid the pregnancy for months amid increasing speculation, with the mother-to-be proclaiming that she'd be free once SNL goes live and they no longer have to hide it from the fans. 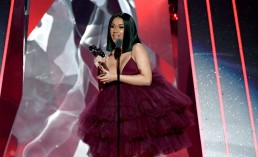