Talk show host Ellen DeGeneres delivered one of the best birthday presents that anyone could ask for to her studio audience, as home viewers became envious.

One Million Acts Of Good

For its first two shows in February, The Ellen DeGeneres Show invited fans to sit in the studio audience as part of her 60th birthday celebration.

The talk show host would later reveal the real reason why they were attending the two-day birthday celebration. It was because each of them completed their "one million acts of good." The talk show host called them "good, wonderful people."

She also pointed out the accomplishments of several audience members, including a couple who drove 800 miles to deliver supplies to Hurricane Harvey victims, as well as a man who quit his job to open an animal sanctuary.

In anticipation of the big moment, DeGeneres revealed a large Cheerios box that was on her soundstage. The talk show host announced that she left a surprise gift under their seats. Inside each of those boxes of Cheerios was something that the audience would split.

"It is the biggest gift I have ever given anybody ever, and I hope that you continue to pay it forward and share all the good. Hold on to your Cheerios, all of you are splitting $1,000,000," DeGeneres told her audience.

The audience roared with delight as the enlarged Cheerios box was lifted up to reveal the cash prize.

De Rossi revealed that she had spent the past two years creating a gorilla sanctuary that combines DeGeneres's passion for animals and her admiration for one of her heroes and role models, the late primatologist Dian Fossey. The announcement of the Ellen DeGeneres Campus of the Dian Fossey Gorilla Fund moved the talk show host to tears.

The two talked about the awkward gift exchange between the Trumps and the Obamas on Inauguration Day, and she also revealed what Mrs. Trump gave her -- a picture frame from Tiffany's. She also gave several birthday gifts to the talk show host such as Metamucil, the Perfect Push-Up, and a chia pet that was shaped like former U.S. President Barack Obama.

There was also a highlight video that showcased DeGeneres's career that ranged from her first appearance on The Tonight Show with Johnny Carson to her monumental coming-out episode on her sitcom Ellen.

The short video clip also showed numerous charitable moments and contributions she was involved in, from rebuilding New Orleans after Hurricane Katrina to surprising the Summit Academy Charter School's Class of 2017 senior class with four-year scholarships. 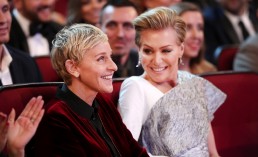 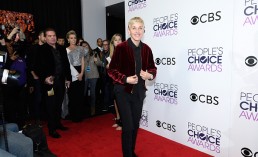