Gabby Douglas will not be defending her Olympic all-around title after a shocking elimination on Sunday.

Although the 22-year-old gymnast, who is just 4'11" in height, finished in third place, only her teammates, Simone Biles, 19, and Aly Raisman, 22, will continue on for Team USA due to their scores being higher than those of Douglas.

"I'm not disappointed at all," Douglas told the Associated Press on Sunday, via a report by People Magazine. "I have no regrets."

During the Olympic trials, Douglas fell twice on the balance beam, but on Sunday, she offered an mpressive performance during the finals. Still, it wasn't enough to send her through to the next round. On Twitter, several users weighed in on the situation.

Gabby Douglas 3rd highest AA score of the day (so far) and won't get to compete for a medal. 2 per country rule is THE WORST.

I woke up very annoyed that Gabby Douglas was x'ed out of the all around based on a stupid technicality.

While Douglas won't be reclaiming her all-around title, she still has a chance at a gold medal durinmg the upcoming team competition and the finals for the uneven bars.

"I would have loved to go out there and defend my title, but right now I'm just rejoicing and so far this has just been an amazing experience," Douglas said. "There's nothing to be ashamed about." 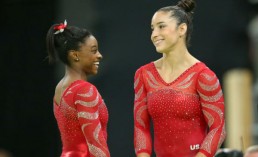 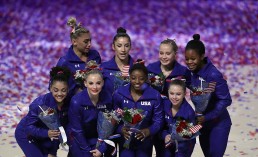 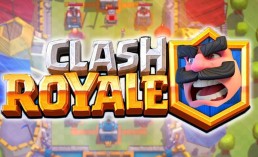