NCIS Season 14 will see the comeback of Robert Wagner in its next month episode but today's episode could also be the last of this month. The series will repeat on next Tuesday i.e. Jan. 31 and the fresh episode would be back on February 7 under the title Nonstop.

This episode would bring back Anthony DiNozzo Sr. (played by Robert Wagner), claims Carter Matt. He will be an additional member of the crime-fighting team, The Sherlocks. Yes, the team is also back and this is reason enough for fans to get excited about the upcoming episode. As for today's episode, it is going to prove significant for Jimmy Palmer's character as it will reveal big secrets about him.

Coming back to the February episode, Nonstop would see The Sherlocks coming back to solve a murder case. A petty officer is murdered in a small town outside D.C. and it prompts NCIS to work with the crime-fighting-team once again. This privately-funded investigation team will bring with itself its newest member Anthony DiNozzo, thereby, giving viewers Robert Wagner.

Currently, these are the only details that are available about Nonstop. And since a promo is not expected until the next week, it does not look like one would have enough material to indulge in speculations as well.

However, an interesting update about the Valentine's Day episode, scheduled to air on 14 February, has come out. It is titled "Pandora's Box" and is going to have two parts which has led to stories that it could be the crossover episode with NCIS: New Orleans.

Speaking of crossover, actor Michael Weatherly, who played Tony DiNozzo and left the CBS show in Season 14, has hinted at a possible crossover between NCIS and his upcoming series Bull, reports TVLine. In an interview, he said that both the shows are quite similar, but they also have a lot of differences.

Nevertheless, he added that it would be interesting to see his NCIS role of Tony DiNozzo meet his character in Bull. The actor also visualized the meeting scenario between the two and said that they would notice their similarities. 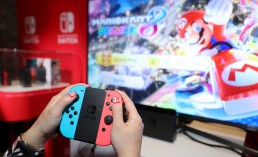