Move over Ashildr, Doctor Who's original immortal is back in town.

John Barrowman's Captain Jack Harkness dropped of the TARDIS radar following the conclusion of Torchwood, and the snarky sex magnet is long over due for a return to the Whoverse. According to the actor's Facebook, the Face of Boe might be back on our screens sooner than expected.

Barrowman dropped by Cardiff for a book signing late last week, and, as it happens, he's set to return to Doctor Who's home base later this month.

"I will be back in Cardiff in about a week and a half," Barrowman teased on Friday. "But I'm not telling you what for."

After all, there are currently two different Whoverse series filming in the Welsh capital. Steven Moffat's Doctor Who team is set to begin production for the 2016 Christmas special before summer, but the Radio Times reports that the series' latest spinoff, Class, is also shooting at the city's Roath Lock Studios.

Harkness, who was first introduced in Nine's WWII "Empty Child" adventure, could easily slot into either of these productions. While we would love to see Jack interact with Peter Capaldi's cantankerous regeneration, the Torchwood leader would also be a boon to the Class storyline. Coal Hill School will be the only "character" tying the spinoff to the Doctor's main hour, and a little visit from the 51st century time traveler could help provide a sense of continuity between the two series.

Doctor Who is currently undergoing a yearlong hiatus, but Twelve and his brand new companion will burst onto screens in time for the 2016 holidays. Following the series' annual Christmas special, season 10 will air in early 2017.

In the meantime, take a little trip down memory lane. Click the video below to dive into the past with Captain Jack Harkness. 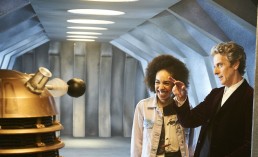 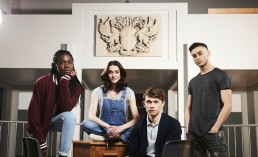 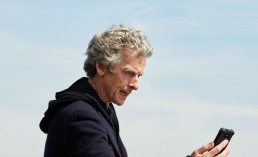