It seemed to be the only way they could make sure Quinn (Rena Sofer) was ousted from Forrester and then hopefully Eric's (John McCook) life, and now that the first big step has been taken to put their plan in motion, Ridge (Thorsten Kaye) and Brooke (Katherine Kelly Lang) will reveal their plot to everyone else on The Bold and the Beautiful.

Brooke went to get Bill's (Don Diamont) shares in the company so Ridge could have them, giving him the majority stake and the ability to remove Quinn even though Eric is the CEO. Bill said she could only have them if she agreed to marry him, and he would give them to her as a wedding present on the day they said their I Do's, and now that she has accepted his proposal and hooked up with him again, Ridge will be confident that the plan is officially underway, and he and Brooke will gather Rick (Jacob Young), Thomas (Pierson Fode) and Steffy (Jacqueline MacInnes Wood) to let them know.

"Brooke is going to sell her shares to me, and that's the weapon I need to get rid of Quinn," Ridge says in a preview clip for the Tuesday, September 6 episode.

However, even if the plan is in place, it doesn't mean that Quinn won't still have an impact on everyone's lives in the meantime, or that she won't drive them all crazy as she continues to insist that the romance she and Eric has is real, and that she isn't trying to pull a fast one so she can obtain a Forrester name.

"You know, just because a person becomes a certain age, doesn't mean that they should be pushed aside. Eric still has so much more to contribute," she says to Ridge and Steffy in the clip.

Meanwhile, her effect on Eric is also going to become more noticeable when Eric runs into Pam (Alley Mills) and shocks her by turning down one of her signature treats, and instead suggests she start working on making better snacks for the office instead.

"I think Quinn is right, maybe it's time to retire this lemon bar recipe and start bringing on something a little more healthy," he says in the clip. 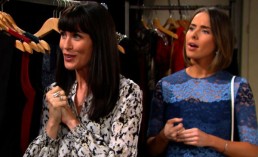 'Bold and the Beautiful' (B&B) Spoilers: Quinn Continues Working On Her Plan For Ivy [VIDEO] 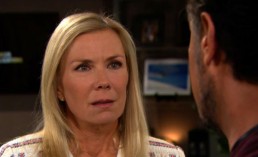 'Bold and the Beautiful' (B&B) Spoilers: Katie Tries Convincing Ridge To Reunite With Brooke As She Decides On Bill's Offer [VIDEO] 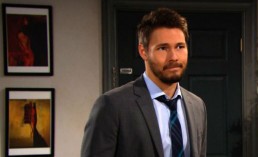 'Bold and the Beautiful' (B&B) Spoilers: Liam Tries To Persuade Steffy To Come Back To Him [VIDEO]