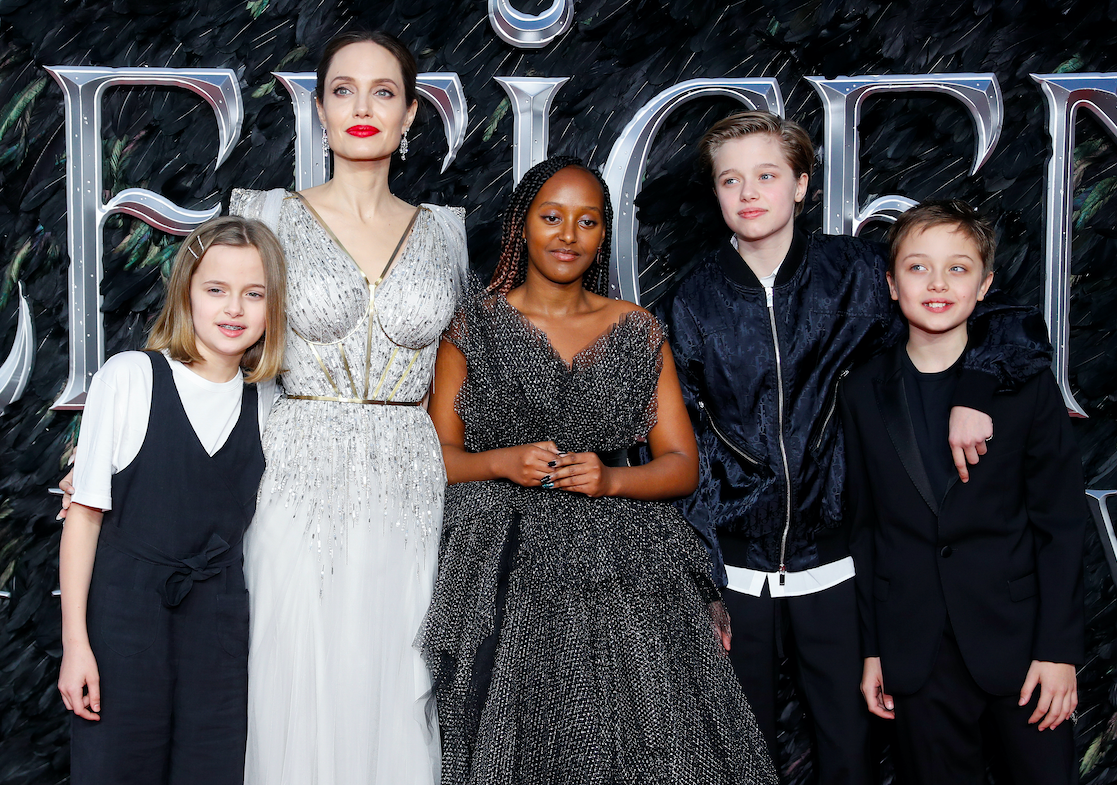 Angelina Jolie, 44, is reportedly trying to upset Brad Pitt, 55, by flaunting their children on the red carpet at several movie premieres for the movie, "Maleficent: Mistress of Evil."

View this post on Instagram
In 5 days, there can only be one queen. See #Maleficent: Mistress of Evil in theaters Friday. Tickets available now: link in bio! A post shared by  Maleficent: Mistress Of Evil (@disneymaleficent) on Oct 13, 2019 at 9:01am PDT

The actress has been travelling to several cities such as Rome, Los Angeles, Tokyo and London promoting her new Disney sequel.

The couple's six children have accompanied her to these events, including Maddox, 18, who attended the Japanese premiere despite currently attending college in South Korea.

According to an article by Heat, the "Mr. & Mrs Smith" star is only bringing her children on the red carpet to upset her ex-husband.

"Ange is using this movie tour as a way to show the world what a great mom she is, and how happy the kids are when they're with her. It's as if she has a point to prove to Brad and get one over on him. She's gone overboard this time."

Rumours circulated that the "Troy" actor has been begging Jolie to help him fix his strained relationship with Maddox. He reportedly told his former partner about his plans in visiting their son in South Korea.

According to Us Weekly, the actress supported the idea, and it gave him hope that he and his son will be okay again soon.

However, no one can confirm the real status of the ex-power couple's relationship at the moment. One rumour surfaced that Jolie is linked with Michelle Pfeiffer because the actress is looking for the love of a woman after her split from Pitt.

Though Jolie admitted before that she has a crush on Pfeiffer during their younger years, it's important to remember that the "Batman" actress has been happily married to David E. Kelly for over 20 years now.

Three years ago, they broke the internet after announcing their separation. Brangelina, as what they were known, filed for divorce after an incident involving the actor and Maddox, their eldest child.

Neither of the A-list stars has confirmed the reports about Brad and Maddox's spat up to this day.

View this post on Instagram
Go mom! Angelina Jolie’s squad cheered her on at last night’s @disneymaleficent premiere — and they all wore coordinating outfits. A post shared by  instylemagazine (@instylemagazine) on Oct 1, 2019 at 10:52am PDT

It was later cited that the cause of their decision to break up was "irreconcilable differences."

In a recent interview, the "Tomb Raider" actress revealed how she felt broken in the years before she worked on "Maleficent: Mistress of Evil" movie. She said she wasn't feeling "very strong" reprising her role. Angelina revealed that it took her a moment to feel the strength of portraying the character again.

There were also previous reports that Jolie is not the type who would put on a show like that since her relationship with their kids are really close, whether there are cameras or none.

Brad's relationship with Pax, his other son, is also reported to be on the rocks. "With Maddox overseas, Brad is also hopeful that Pax will also be interested in reconnecting without the influence of his older brother."

Up to this day, the ex-couple are still trying to work out how to divide everything, and they are hung up on what to do with the French winery and castle they bought in 2011.