Game of the Thrones was a cultural phenomenon that categorized the 2010s. When the show ended back in 2019, we all prepared ourselves to say goodbye to this aggressively fantastical world. Now, we are going back.

The official teaser trailer for House of the Dragon was released at an HBO Max Europe event. This new show is based on George R.R. Martin's book Fire and Blood. This novel is set 200 years before the Game of Thrones series begins (making it the perfect harvest ground for this prequel!) Here is the trailer below.

Right off the bat we have the fire imagery. If the title House of the Dragon wasn't enough to tell us this was going to be a Targareyan tale, we definitely know now. Wow, seriously, there is not a moment that goes by in this trailer without the presence of fire. The voiceover says mysteriously, "Gods, Kings, Fire, and Blood." In tune with the original Game of Thrones, we can be sure that House of the Dragon is going to be as captivatingly violent as all of the rest.

Furthermore, we Game of Thrones fans know that the Targareyans reigned until the "mad king" burned everything to the ground. As this is 200 years prior to the start of Game of Thrones, we can further assume that this reigning family is the Targareans. (Also with the seal, the fire, everything.) Everyone also shares the quintessential Targaryen bleach blonde hair. We love to see familial relations.

Towards the end of the trailer we get a glimpse of, *GASP*, the iron throne! Wow, it has been a while. They do an excellent job making the throne look fresher in this 200 years before the tale than in the original GOT. As lore states, the throne was forged out of iron swords by the flames of the dragon Balerion. Balerion was one of the three dragons owned by the Targareyan family. Therefore the sight of the iron throne itself in this setting is a symbol of Targaryen power and reign.

As we see the iron throne, the voice over ominously whispers, "Dreams didn't make us Kings. Dragons did." The Targareyan seal then appears, surrounded by flames. Dragons are a symbol of might, force, magic, and power. If the voice over is suggesting that dreams, which are mere thoughts or intentions, did not bring them to power, it suggests that the Targareyans are not casually holding onto the crown with the promise of good things. They are demanding it by force. (Which means this is going to be one violent and interesting show.) 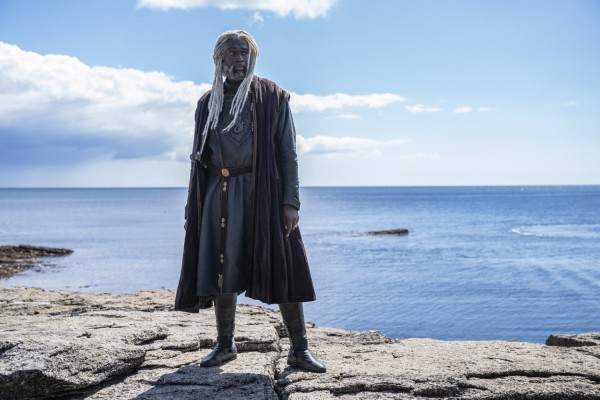 Something else that is very interesting to note: the word "king" or "kings" is repeated multiple times throughout the trailer; however, every time the word is mentioned, a woman is on the screen. Even when the voiceover says "Dreams didn't make us Kings," it is in fact a woman walking towards the iron throne. That doesn't happen accidentally. Fantastical medieval warfare combined with overtones of girl power? Yes please.

House of the Dragon comes out in 2022 on HBO Max. I'll be watching it. Will you?

Tags: Game of Thrones house of the dragon Trailer Teaser Trailer hbo
© 2021 EnStars.com All rights reserved. Do not reproduce without permission.
Most Popular
You May Also Like

STILL IN LOVE? Jorah Shows Up To Emilia Clarke's Birthday Party Making Us Wish They Actually Got Together!!

Or, more accurately to this real and mortal world, Happy Birthday Emilia Clarke! The Game of Thrones actress had a seemingly unforgettable birthday bash the other night, and she has the Instagram pictures to prove it.

People would think that working on a very successful TV show like "Game of Thrones" is a dream come true. But the scenes are not at all easy.

Kit Harington reflected on the mental health issues he suffered from because of "Game of Thrones."

For those still getting "Game of Thrones" withdrawal, a new fantasy fiction series is going into development - "A Court of Thorns and Roses" written by Sarah J. Maas.

Emilia Clarke's Search for Love: GoT Actress Signs up to Online Dating after Failed Relationships

Emilia Clarke is just one of the many celebrities who's also hoping to find love through online dating.