Its On! 'Squid Game' Creator Hints That The Brothers May Engage In Bloody Battle In Season 2

Hwang Dong-Hyuk, creator, writer, and star of the worldwide phenomenon Netflix's Squid Game, is anything but shy about the success of the show. In an interview with The Hollywood Reporter, Hwang opens up about what the show origins, also what we might expect from Season 2.

Like so many in the entertainment industry, Hwang had to face hardships early on in his career in terms of selling his work to producers. A daunting task if there ever was one. It was this strife which led to the concept's conception in a life imitating art sort of way. Hwang explains,

So back in 2008, I had a script that I had written, which I was running around with trying to get investment, but it didn't work out and it wasn't made into a movie. So that actually put me into a really difficult financial situation - I was broke. So I spent a lot of time killing time in comic book cafes, reading. And I read a lot of comic books revolving around surviving death games - manga like Liar Game, Kaiji and Battle Royale. And well, I read some stories about these indebted people entering into these life and death games, and that became really immersive for me because I was struggling financially myself. I was even thinking that I would love to join a game like that, if it existed, to make a bunch of cash and get out of this terrible situation. And then that got me thinking... Well, I'm a director; why don't I just make a movie with this kind of storyline? So that's how it all got started. I decided that I wanted to create a Korean survival game piece in my own way. That's how Squid Game was initially conceived in 2008; and then I wrote a script for a feature-length film version throughout 2009. 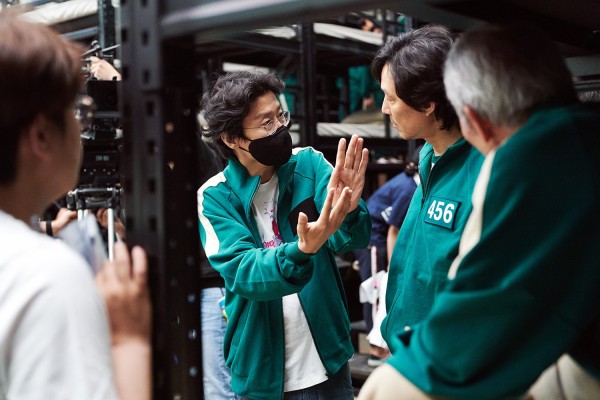 Hwang goes on to wax about what could be next for the show, given the amount of characters and unfinished storylines left untouched after the Season 1 finale,

It's true that season one ended in an open-ended way, but I actually thought that this could be good closure for the whole story too. Season one ends with Gi-hun turning back and not getting on the plane to the States. And that was, in fact, my way of communicating the message that you should not be dragged along by the competitive flow of society, but that you should start thinking about who has created the whole system - and whether there is some potential for you to turn back and face it. So it's not necessarily Gi-hun turning back to get revenge. It could actually be interpreted as him making a very on the spot eye contact with what is truly going on in the bigger picture. So I thought that might be a good simple, but ambiguous, way to end the story for Gi-hun. But there are some other stories in the series that have not been addressed. For example, the story of the police officer and the story of his brother, The Front Man. So if I end up creating season two, I'd like to explore that storyline - what is going on between those two brothers? And then I could also go into the story of that recruiter in the suit who plays the game of ddakji with Gi-hun and gives him the card in the first episode. And, of course, we could go with Gi-hun's story as he turns back, and explore more about how he's going to navigate through his reckoning with the people who are designing the games. So, I don't know yet, but I'll just say there are a lot of possibilities out there for season two storylines.

Needless to say, There is a lot to unpack in terms of where the future of the characters and story are headed, even for the brains behind the show. Though if it is anything like Season 1, Netflix might have to get a bigger piggy bank.

Tags: Squid Game Season 2 netflix
© 2022 EnStars.com All rights reserved. Do not reproduce without permission.
Most Popular
You May Also Like

"Squid Game" has become one of the most talked-about Netflix shows today that they're even on the same level with other successful English-speaking series on the platform.

'Squid Game' Actor Lee Jung Jae Reveals What He Would Do On Series' $38.4M Prize Money If It Was Real

"Squid Game" actor Lee Jung Jae, who played the lead role on the hit Netflix series, revealed what he would do on the prize money if it was real.

'Squid Game' Director Compares Self To BTS: 'This is What No. 1 Feels Like'