Six months ago, Lisa Lampanelli would not have thought she'd be doing a podcast with two 30-year-old men. But, here we are! Podsauce's hosts Alesha and Dax are talking with Lisa about her transformation, reclamation of her happiness, and creation of "Losers With A Dream" on this web exclusive.

She actually met one of her co-hosts Beau McDowell through her niece, who asked, much to Lisa's chagrin, if she would go to his show and give him advice. Lisa was pleasantly surprised to find that Beau is actually funny, beginning to spend more time with him and eventually being introduced to his friend-turned-co-host, Nick Scopoletti. Like in Podsauce's non-extended version of this interview, she talks about how interesting the conversations were between these two men, thinking that it could actually make a great podcast. 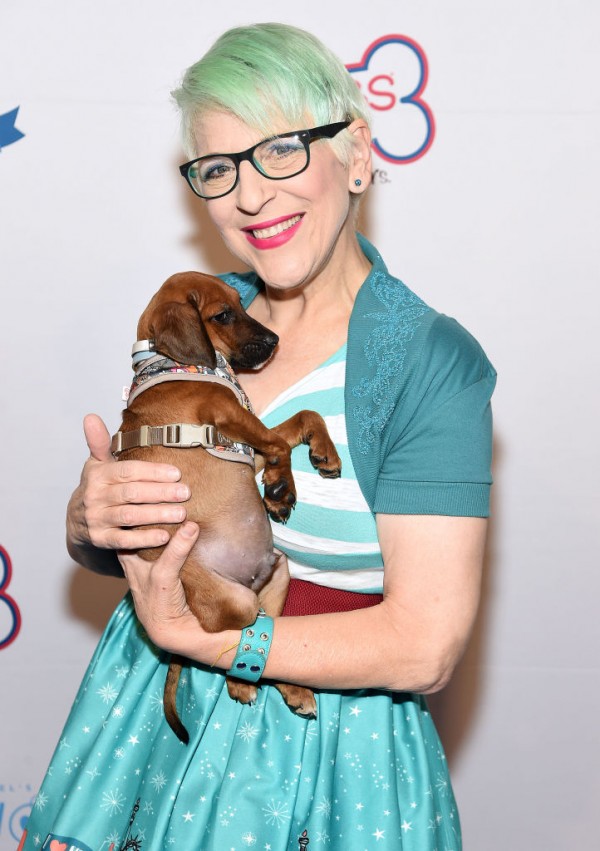 So like any Beyoncé would do, she began "Losers With A Dream," a Destiny's Child trio of comedy and self-help. Lisa says that the podcast, while it is funny, is more about the constant working on themselves. They discuss topics like jealousy, anger, body image, sobriety, and more, stopping in for mental health checks every episode. Dax brings up how in one episode, she felt like she was told by an interviewer that she was a "has-been" (her words, not the interviewer's), having quit her career while she was in a slump.

She brought this up with Beau and Nick to walk through why this small comment, which was really not even about her, made her feel like a failure. This led to more mental health check-ins, and she, Dax, and Alesha talk about the concept of hiding shame, especially in the form of weight loss and weight gain with the pandemic. Hence why Lisa chose to not only start "Losers With A Dream," but to bring up these things that she and other find shameful.

Lisa, while being a friend to Beau and Nick, is also serving as somewhat of a mentor. She mentions that while "Losers With A Dream" is basically about feeling all your feels and talking through the hard parts, she has seen that concept bleed over onto the stage with their comedy acts. She says while, yes, they are funny, she wants to see them do what other male comedians don't do and push really deep. And, frankly, we are loving it.

Alesha asks if Lisa would ever return to the stage with her newfound self, to which Lisa replies with a simple, "Who knows?" She mentions that while she still does love the roast format, its popularity has dwindled in the years. Although, she recently did an interview where she did a "Roast of People Who Really Deserve It," enjoying that it wasn't about celebrities or low-hanging fruit.

Lisa goes through figuring out that her career had stopped making her happy and wanting to purchase her parents' home before they move on to her podcast recommendations.

She talks about being a Patreon of "The Minimalists Podcast," even being a guest on the show recently. Of course, "The Nikki Glaser Show" is her favorite in the car, becoming a huge fan and admirer of the comedian. And, actually, a past guest on Podsauce is her niece, Christine Schiefer of "And That's Why We Drink," so she naturally listens and has guest-starred on that podcast. Not to mention, she was recently on Dax's other podcast "Hollywood Raw Podcast."

When Alesha recommends "70 Over 70" for Lisa, they get on the topic of death, which is weirdly uplifting. They circle back around to misery loving company and grief and the fact that Lisa now calls two 30-year-old men when she's feeling down about her day. Anyway, that's all for this Podsauce web exclusive! You can hear more from Lisa Lampanelli on her podcast "Losers With A Dream." See ya!

Tags: comedian Taylor Swift lisa lampanelli mental health Celebrities
© 2022 EnStars.com All rights reserved. Do not reproduce without permission.
Most Popular
You May Also Like

While people around the world are mourning and paying tribute to Kobe Bryant following the unfortunate helicopter crash that also took the lives of eight other people, one comedian used the tragedy as an opportunity to troll those in mourning.

In the lawsuit, Mo’Nique clearly stated that she was offered less money for a job compared to the male and white female comedians.

Beloved actor and comedian Chuck McCann passed away at the age of 83. McCann, survived by his wife of 40 years and three kids, was also a prolific TV host, puppeteer, and celebrity impersonator.

2017 has probably been the greatest year for comedian Tiffany Haddish, but 2018 is about to get even better. The 'Girls Trip' star just nabbed a new role in a comedic thriller and will be the executive producer of the project.

Known to many as someone who pushes the envelope in terms of cracking controversial jokes within the free-flowing confines of his comedy, noteworthy internet joke sensation Daniel Tosh made the headlines this morning via an offensive racial remark that was apparently aimed at a female audience member at Hollywood's Laugh Factory.