Do Not Fear!! We're Not Done With Downton Yet! 'Downton Abbey 2: A New Era' Starring Maggie Smith and Hugh Bonneville Has Just Released It's Official Trailer!

Keeping Up with the Kardashians may be on it's final season, but there's no limit on keeping up with the Crawleys. The historical fiction sensation Downton Abbey has officially released their trailer for Downton Abbey 2: A New Era. The show will bring back all of your favorite cast members including Maggie Smith, Hugh Bonneville, Laura Carmichael, Jim Carter, Brendan Coyle, Michelle Dockery, Kevin Doyle, Joanne Froggatt, Elizabeth McGovern, and many others. This orderly drama is sure to have us clutching our tea cups and sitting at the edge of our seats.

As seen in the trailer, the premise of the film focuses on the sensational Maggie Smith returning to her role as Violet Crawley. She expresses that, in her past, she, "met a man, and now [she's] come into possession of a villa in the South of France." In a show that has been accused by Saturday Night Live as being "mostly about cleaning", we Downton fans know that this is MAJOR TEA. The trailer ends with Violet Crawley getting up saying, "And with that, I will say goodnight and leave you to discuss my mysterious past." Don't worry, Maggie! We will! 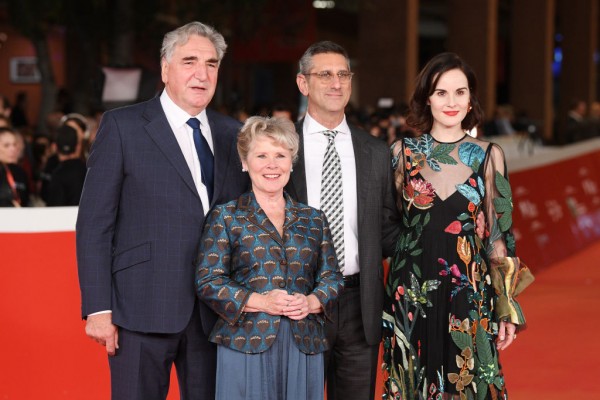 The long-rumored 'Downtown Abbey' movie will finally go into production. Several fan favorites were slated to return, including Dame Maggie Smith and Joanne Froggatt, while others would not be appearing.

She's been nominated nine times, won four, an attended no ceremonies. But WHY did Dame Maggie Smith skip out on the Emmys once again?

Michelle Dockery Says 'There Is Potential' For A Downton Abbey Movie

More rumors have circulated over the possibility of a 'Downton Abbey' movie.

The possibility for a 'Downton Abbey' movie is still up in the air.

How to Watch the 2016 Emmy Nominated Shows Online

Here's where you can watch many of the shows nominated for Emmys this year.

The series creator opened up on the idea of turning 'Downton Abbey' into a feature film.

Downton Abbey Creator Has 'Hope' For A Movie

The creator of 'Downton Abbey' is remaining positive about a potential movie based on the series.

Lesley Nicol Would 'Love' To Do A Downton Abbey Movie

One of the stars of 'Downton Abbey' gave more insight on a potential movie based on the series.

It seems that a 'Downton Abbey' movie is more likely to happen.