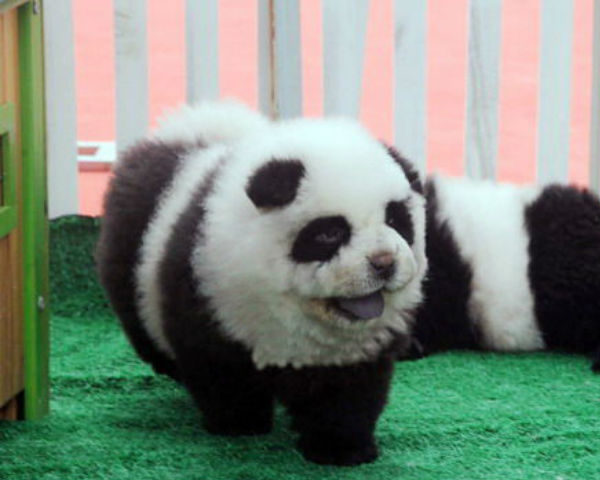 Have you ever seen these chow chows appearing around Singapore which actually made a stir because of their unusual appearance? These chow chows dogs looked like panda bears, and even at a first glance you would directly assume that they really look like pandas from their hair color to the size of their body.

You heard that right, these three pooches — Tudou (male), Yumi (female), and DouDou (female) — belong to Meng Jiang and her husband Anton Kreil, a professional trader. The couple has purposely dyed their dogs’ fur to make them resemble the easily recognizable native animal in south central China. And they are certainly turning heads when they walk down the street.

Jiang is even helping her chow chows become local celebrities. She started a photo business allowing strangers to come to her studio to take pictures with her little panda chow chows.

Apparently, a petition was launched on Change. org against Jiang for dyeing the fur of her chow chows. The petition, which has more than 3,000 signatures, argues that there’s no proof that animal dye is safe despite being legal. It also deems Jiang’s business dog “exploitation.”

But Jiang, immediately express her side by stating that she’s not putting her pooches in harm’s way and takes good care of her little ones.

Watch the pups in action in the video below and see for yourself how much these pooches resemble panda bears!