Kylie Jenner was supposed to guest in "The Late Late Show" with James Corden. However, the youngest Jenner bailed out the last minute, saying she is sick. Her sister, Kendall Jenner, filled in for her and the model may have confirmed that Kylie is just faking her condition.

The 19-year-old Jenner should have been Corden's guest on Nov. 16 but she claimed she wasn't feeling well. Kendall, on the other hand, was gracious enough to take her sister's place and appeared at "The Late Late Show."

The British comedian was skeptical about Kylie's excuse and he made that known during the show, the Hollywood Life reported. James Corden got Kendall to play a game. The host would ask the 21-year-old Jenner questions. She would either answer truthfully or drink a shot of clam juice.

As they started the skit, Corden mentioned Kylie had to cancel on him because she was sick. Then, in an unexpected move, the 38-year-old talk show host pulled out a picture of the lip kit mogul taken by the paparazzi on that same day. He then asked Kendall Jenner, "... how is she feeling?"

In a surprise move, instead of answering the question, the model went for the clam juice shot instead. So does this mean a confirmation from Kendall that Kylie was just faking it? Or does the Victoria's Secret model just have a thing for seashell essence?

Whether Kendall's move was a confirmation or not, Kylie busted herself. The youngest Jenner posted videos on her Snapchat account on Nov. 16. The clips show her having some bonding time with Tyga's son, King Cairo. In some of the videos, the two were seen hugging and at one point, her boyfriend's son even gave her a kiss.

If she was indeed sick, why would she allow a child to play with her and risk him getting ill as well? It is great that the two are getting along but it is a wrong move for the teen businesswoman to have bonding time with Cairo if she is under the weather. 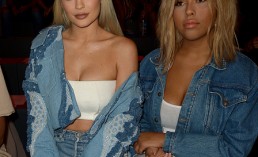 Kylie Jenner Snapchats: Did the Reality Star Just Reveal She’s Ready to Have Babies with Tyga?