A brand new episode is set to air for the twelfth season of CBS network's police procedural crime drama, "Criminal Minds." Fans and viewers of the drama series are reportedly beyond excited over the events that are going to happen, especially for Matthew Gray Gubler's character, Spencer Reid.

The previous episode of "Criminal Minds" season 12 featured events that apparently shocked many fans as they just saw Dr. Spencer Reid getting arrested in Mexico and charged with illegal possession of drugs. This happened when he travelled all the way to and from Mexico to meet the doctor that was supplying him some medicinal drugs.

When the doctor was found murdered, the Mexican officers arrested and charged Spencer for murder when he remembered that he was holding the knife that ended the doctor's life. The events left fans of "Criminal Minds" season 12 mind-blown as this could really be a pivotal scene that could lead to a much intense following episode.

According to Cinema Blend, fans should not worry too much as Spencer will be rescued on the upcoming episode of "Criminal Minds" season 12. Even though it is not sure yet whether Spencer Reid gets out of the Mexican prison immediately, it will be a comfort to know someone will appear and fix his mess once and for all.

As per the source, although the youngest Behavioral Unit Analysis member is not eligible for any assistance from the FBI, he will be getting help from Matthew "Matt" Simmons and Clara Seger, portrayed by Daniel Henney and Alana de la Garza, respectively. Both are characters from "Criminal Minds" spin-off, "Criminal Minds: Beyond Borders."

Additionally, Agent Emily Prentiss, (Paget Brewster) will reportedly be asking defense attorney, Fiona Duncan, to help Spencer so he will be able to get out of prison on the fourteenth episode of "Criminal Minds" season 12.

On a report from TV Guide, it has been reported that more of Spencer Reid's mess will be tackled on the remaining episodes for "Criminal Minds" season 12. On an interview, executive producer, Erica Messer said that episode 14 will be a strong one. It will reportedly highlight the scenarios on whether Spencer will plead guilty against his charger or not and the consequences of his actions. Messer added that it will be one of this season's great episodes. 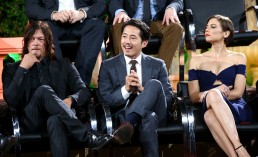 'The Walking Dead' Season 7 Spoilers: Episode 10 To See Face-off Between The Kingdom And Saviors; Reason Behind Rick's Smile Revealed [VIDEO]

"The Young And The Restless" Spoilers: Lily Makes Another Mistake; New Plot To Focus On Importance Of Heart Health [VIDEO]