Hernandez, who was found guilty of a first-degree murder last year, hanged himself inside his cell at the Souza-Baranowski Correctional Center located in Shirley, Massachusetts. At three in the morning, the correction officers saw Hernandez's body being tied using a bedsheet that was attached to his cell window. According to New York Times, several members of the center's medical staff tried to save the former footballer's life and was brought to the hospital before he was announced dead one hour later.

On 2015, Hernandez was pleaded guilty of killing semi-professional football player, Odin Lloyd, who was found out to be dating his fiancée's sister that time. Lloyd was shot six times at a park one mile away from Hernandez's house on June 2013 and investigators said that before the incident, Lloyd was speaking with a group of people that Hernandez did not like.

Two other people were arrested days prior to the incident, with the charge being accessories after the fact of the crime. Hernandez's first-degree murder was added with five more weapon charges, which automatically sentenced him to life imprisonment.

On Monday, it was reported that the last person to see Hernandez alive was his fellow inmate named Kyle Kennedy, a 22-year old convicted robber who allegedly was the former football player's prison lover. Kennedy was reportedly left with one of Hernandez's suicide letters, which his lawyer had confirmed. Kennedy has now been placed on suicide watch while his lawyer is currently processing a request for him to see one of the letters. Hernandez's fiancée Shayanna Jenkins, was also reported to have possession of one of three suicide notes.

Jose Baez, Hernandez's lawyer, had denied the claims about his client's bisexuality, telling the media that the rumors of any gay lover, in and out of prison, were false. Kennedy's lawyer later refused to comment on the alleged relationship between his client and Aaron Hernandez. 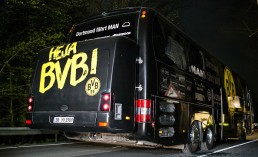