After reports of Kyrie Irving's trade request escalated in the NBA, this time, Lebron James is also in the center of an issue. According to latest reports, he is reportedly planning to leave the Cleveland Cavaliers too as he is already entering his last year with the team.

When Irving requested a trade to other teams, a lot of Cavaliers fans were also thinking if James also wants to be traded to other teams. Now that he is entering his last year with the team, some reports were escalating that he is also planning to leave already.

According to Bleacher Report, a certain source claimed that James is 100 percent leaving the Cavaliers since the relationship with the team's owners is already beyond repair. However, this report was refuted by FOX Sports Ohio saying that there is no truth in the report that James is preparing to leave his team.

Previous reports claimed that even if there are no indications of James leaving the Cavaliers, he wants his team to execute a plan prior to him committing to Cavs long term. It was then added that he started to feel reluctant in building his commitment to his team and this comes from a set of complications.

Reports also confirmed that James does not plan to decide on his future until after this upcoming season. Perhaps the Cavs prefers to re-sign James someday and chase for more championships and titles.

The moment James signed with the Cleveland Cavaliers last 2014, it seemed like it was very unlikely that he will leave the team for the second time. In his essay he wrote for Sports Illustrated when he returned to the Cavs, he shared that his calling goes beyond basketball.

Since his return, Dayton Daily News reported that many have changed and the Cavs won their first NBA title and this also cemented the legacy of James. The Cavs has been thrown into disarray this summer and this included Irving's trade request as well as the departure of GM David Griffin.

It was later claimed that James also felt disappointed when the Cavs opted not to renew Griffin's contract anymore since it was believed that the former Cavs general manager helped build the team to reach three straight NBA Finals. Besides James will already be turning 33 in this year so it is understandable if he wants to spend the remainder of his career in NBA in a more stable team. 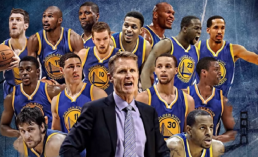