LuAnn De Lesseps announced plans to divorce Tom D'Agostino in early August and during a recent interview, her former Real Housewives of New York City offers fan an update on how her friend was holding up post-split.

"She's great... She's just like, a trooper and what I love about her too is she has a lot of integrity. She's like, 'I love my girlfriends and we are all in this together but we are going to get through it,'" Bensimon explained to OK! Magazine on September 29.

As for whether or not De Lesseps will ever date again, Bensimon said that she surely would.

"Oh yeah, of course, she's going to get married to the most amazing man," Bensimon said.

De Lesseps confirmed her plans for divorce with a statement to fans on Twitter.

"It's with great sadness that Tom & I agreed to divorce. We care for each other very much, hope you respect our privacy during this sad time!" she wrote.

A short time later, an E! News report suggested that D'Agostino may not be the husband type.

"He wanted to live his bachelor's life too. He's never been married," a source shared with us. "She wanted a marriage, he wanted a part-time marriage... He was always kissing other girls. When you're a bachelor for 50 years, it's hard to break old habits. But she loved him and wanted to make it work. He loved her too, but had a hard time staying focused."

"She just broke down and got tired of trying and hearing these stories about his infidelity," another source shared. "She's going away tomorrow with her kids to regroup. She's a mess." 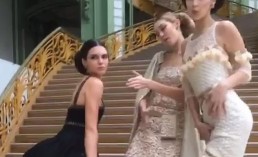