"Modern Family" actress Ariel Winter is famous for making headlines all the time and she does not seem bothered about people body shaming her, she slams them back instead.

Recently she posted a picture on Instagram in which she is wearing a crop top and is flashing her underboob as the top is too small. Winter has been flaunting her sexy figure which she achieved after hard work, she bravely and confidently wears her own style not thinking about the world.

The 19-year-old once wrote on Instagram, being assertive she had said, " I'm not trying to show you my a** in shorts when I go to the grocery store. I'm trying to live my life."

She further added that she wears what she likes and no one can blame her for that and who gets to decide what is appropriate or fashionable.

Over the past few month, the young actress sported some steamy looks like wearing her Daisy Dukes and crop tops. At the 2017 Emmys, the starlet wore a black gown flashing her cleavage and the dress also had thigh-high slits. The actress was surely looking gorgeous in it as she carries off whatever she wears too well.

Earlier at a "Modern Family" event, the actress dared to wear a cutout mini dress which stood out as her co-stars were wearing relatively less glamorous clothes. Her co-stars chose considerably less glamorous outfits. As usual, the fashion critics lashed out at her but she gave it back to them on Instagram saying that why can't she wear clothes to feel good about herself.People should wear whatever they want to wear without being judged all the time. She also asked every everyone to wear what they like and not to let anyone stifle them.

However, Ariel and her mother got into an ugly spat and she does not want to keep in touch with her mother. Her estranged mother Chrystal Workman had said that according to her, Winter should grow up and dress properly and be the person she is. She also added that she feels sad and that she does not have to expose so much when it is not necessary. 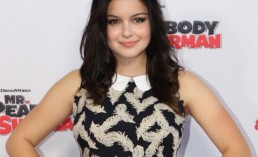