Our beloved Nick Lachey was sent home during last night's movie-themed episode of Dancing with The Stars.

The contestants were all assigned to create routines that symbolized the 'spirit of movie genre'. While it was a magical night for everyone to watch, someone had to leave.

Nick and Peta were in danger of being eliminated, along with football player Terrell Owens and his partner Cheryl Bruke, and television actress Victoria Arlen with her partner Val Chmerkovskiy. But in the end it was the handsome 'Because of You' singer that got the boot.

Shania Twain joined as the special guest judge and performed her classic hit song, "Still the One".

In addition to Nick Lachey's exit, Pretty Little Liars star Sasha Pieterse has also been sent home during the first elimination round.

American violinist, Lindsey Stirling earned a perfect score with her partner Mark Ballas as they performed the Argentine tango with a sci-fi twist. The judges praised the performance and hailed it the best dance of the season so far, resulting in the duo receiving a score of 40.

Other notable mentions were singer Jordan Fisher and his partner Lindsay Arnold, who performed an emotional rumba to Ed Sherran's song 'Supermarket Flowers'. The dance, which was an ode to dramatic films, landed the pair a score of 39. Terrell Owens seemingly redeemed himself with a tribute to the spy-movie genre, that garnered a score of 37. Lachey's wife, Vanessa and her partner Maksim Chmerkovskiy received 8's straight across the board with their tribute to the classical movie genre.

Contenstant Frankie Muniz felt the judges should have been a little more harsher with him, as he performed a jazz number with is partner Witney Carson, that was a nod to animated movies.
Next week, the contestant will have to spook their way to top with a "Halloween" themed number.
Who do you think will be voted off next?
Catch "Dancing With the Stars" Mondays, on ABC at 8pm!
Be sure to check out Enstarz for the latest in celebrity entertainment! 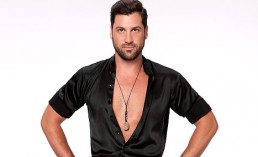 Derek Hough DWTS: Will He Ever Return As A 'Dancing With The Stars' Pro? [VIDEO]

Tennis Legend Roger Federer Offers Free Tips On How To Be A Pro!