T.I. and Tiny have reportedly decided to reconcile. But reports say the two are still fighting over his alleged now ex-mistress, Bernice Burgos.

“Tiny and T.I. maybe trying to make a go of it again, but she still has trust issues, and it’s causing problems,” an insider told Hollywood Life Monday. “Tiny recently went through T.I.’s browser history and saw that he’s been all over Bernice’s Instagram, checking out her photos – including each and every one of the sexy selfies she’s recently posted.”

The source added Tiny was even more upset when she found out how intense T.I.’s alleged search was.

“What really wound Tiny up even more though, was the fact that it isn’t even just Bernice’s recent photos that T.I.’s been looking at, he’s been going deep on her Instagram, and checking out photos from ages ago, and it’s all the sexy, half-naked ones. Tiny was already pissed that T.I. still follows Bernice on Instagram, but finding out he’s been spending all this time salivating over photos is the last straw.”

Tiny filed for divorce from T.I. in late 2016 amid speculation that he had been getting extremely close to Burgos. She and Burgos even battled on Instagram at one point. Still, nearly a year later, new reports say T.I. and Tiny are working out their marriage and T.I. called it quits with Burgos. But Tiny’s recent revelations reportedly set them back a few steps.

“Tiny confronted T.I. about it, and he did his usual trick of turning it around to make Tiny seem like she’s the bad one, for ‘spying’ on him – and it ended up turning into a huge fight between them,” the insider added. “They’ve made up for now, but T.I.’s made it clear that he won’t be dictated to about what he can look at online, and who he can follow – and that Tiny needs to check herself and quit with the jealous routine.”

The source continued and said Tiny’s main concern is whether she can trust her husband. They said she’s now questioning how far T.I. is willing to go to reconcile for good.

Interestingly enough, this comes during rumors that Tiny has been cuddling up to her professional fitness trainer.

The two have been married for seven years. They have three children together, the youngest being one-year-old Heiress Harris.

Be sure to keep up with Enstars for the latest in entertainment news. 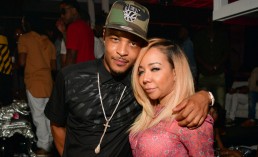 T.I. And Tiny Back Together 2017: Rapper 'Ghosted' Bernice Burgos Amid Reconciliation With His WIfe [VIDEO]