Taylor Swift has been given the green-light to perform on ABC’s Scandal this Thursday.

The now highly anticipated event will air just hours before her sixth studio album Reputation is released at midnight on Friday.

A teaser of the performance aired on Good Morning America early Thursday morning. In the video, waves and rocks collided as a bird soared across the sky. Next, a mansion came across the screen before it showed a piano in the middle of a simple yet elegant room. Hands that appeared to belong to Swift began to play the grand instrument.

The entire performance will be 3 minutes long. Fans who will miss the performance or simply want to relive it again, can catch an encore and an extended version on Freeform on Nov. 10.

Swift is bound to be in the middle of tons of drama for the episode.

In the teaser for the complete episode called, Adventures in Babysitting, Olivia Pope and Fitzgerald Grant, AKA Fitz, continue to play out their love/hate relationship. He makes it clear to Liv that he’s not backing down and will do “whatever’s necessary” to pull her from the black hole she’s entered into with no shame or remorse.

But Olivia also has Mellie Grant, Fitz’s successor as President and his ex-wife, wanting her to be on her side considering Olivia is her new chief-of-staff. Things appear to be coming to a head between Fitz, Olivia, Mellie, and somehow Jake and Papa Pope are thrown into the mix as well.

Thankfully for Fitz, actor Tony Goldwyn believes he has the strength to save Olivia from herself.

Tony Goldwyn Has Hope For Liv And Fitz

“My hope is that both Fitz and Olivia are able to navigate their own personal crucibles successfully enough to – as Shonda [Rhimes] says – ‘earn’ a future together,” Goldwyn told US Weekly recently. “I do believe that Fitz can pull Olivia back from the black hole she is slipping into, but it will not be easy. I have no idea if Shonda intends for him to be successful in that effort. We will have to wait and see what she has in store of us.”

The romance and fallout between Fitz and Olivia has been going strong since the show first debuted in 2012. Now that it’s in its final season, it will only be a matter of time before fans know how things end for good.

The final season of Scandal airs Thursdays at 9/8c on ABC. 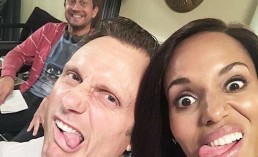